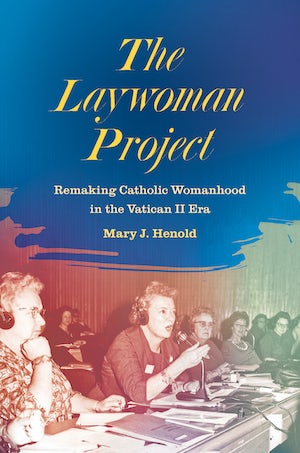 Summoning everyday Catholic laywomen to the forefront of twentieth-century Catholic history, Mary J. Henold considers how these committed parishioners experienced their religion in the wake of Vatican II (1962–1965). This era saw major changes within the heavily patriarchal religious faith—at the same time as an American feminist revolution caught fire. Who was the Catholic woman for a new era? Henold uncovers a vast archive of writing, both intimate and public facing, by hundreds of rank-and-file American laywomen active in national laywomen’s groups, including the National Council of Catholic Women, the Catholic Daughters of America, and the Daughters of Isabella. These records evoke a formative period when laywomen played publicly with a surprising variety of ideas about their own position in the Catholic Church.

While marginalized near the bottom of the church hierarchy, laywomen quietly but purposefully engaged both their religious and gender roles as changing circumstances called them into question. Some eventually chose feminism while others rejected it, but most, Henold says, crafted a middle position: even conservative, nonfeminist laywomen came to reject the idea that the church could adapt to the modern world while keeping women’s status frozen in amber.

Mary J. Henold, John R. Turbyfill Professor of History at Roanoke College, is the author of Catholic and Feminist: The Surprising History of the American Catholic Feminist Movement.
For more information about Mary J. Henold, visit the Author Page.

"A nuanced picture of a group of Catholics whose spiritual practices have often been overlooked."—Publishers Weekly

“Henold . . . analyzes the responses of one international and five US Catholic women’s groups (comprising mainly white, middle-class, middle-aged women) to Vatican II and 1960s feminism. . . . Henold’s study is a great launching point for research into other religious groups. . . . Hopefully, the hardened ideological lines Henold identifies won’t prevent this readable, discussible study from being adopted by all library collections at the intersection of gender and religion.”—CHOICE

“Henold’s superb work of scholarship, at once funny, insightful and wrenching. . . . Shows how my mother’s and grandmother’s generations fought an uphill battle, ‘confronting and dismantling’ essentialist ideas inch by inch. Its patient, charitable, critical, empathetic account of its subjects calls both Catholic women and Catholic men to continue this work.”—America Magazine

“A strength of the book is its focus on an alternative women’s history of the American Catholic church in the Vatican II era. . . . It is important to gain a better understanding of the lessons learned and the battles fought over gender identity within the hierarchy of the Catholic church during this era of women’s rights.”—Affilia: Journal of Women and Social Work

“Henold has written a valuable and informative book on an important subject. It is recommended reading for anyone interested in Christianity and gender in the American sixties.”—Journal of Ecclesiastical History