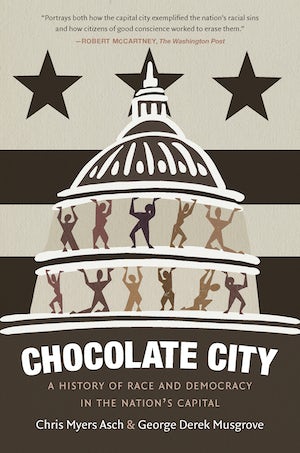 Named a Best American History Book of 2017 by Kirkus Reviews

Monumental in scope and vividly detailed, Chocolate City tells the tumultuous, four-century story of race and democracy in our nation’s capital. Emblematic of the ongoing tensions between America’s expansive democratic promises and its enduring racial realities, Washington often has served as a national battleground for contentious issues, including slavery, segregation, civil rights, the drug war, and gentrification. But D.C. is more than just a seat of government, and authors Chris Myers Asch and George Derek Musgrove also highlight the city’s rich history of local activism as Washingtonians of all races have struggled to make their voices heard in an undemocratic city where residents lack full political rights.

Tracing D.C.’s massive transformations--from a sparsely inhabited plantation society into a diverse metropolis, from a center of the slave trade to the nation’s first black-majority city, from “Chocolate City” to “Latte City”--Asch and Musgrove offer an engaging narrative peppered with unforgettable characters, a history of deep racial division but also one of hope, resilience, and interracial cooperation.

“[The authors] embrace the funk band Parliament’s moniker for the District of Columbia and deliver a narrative as grand as the city itself. . . . This enriching journey showcases the underappreciated saga of African-American success in the face of adversity.”--Publishers Weekly, starred review

"An ambitious, comprehensive chronicle of the civic experience of blacks, whites and other races over more than two centuries in Washington. . . . [It] succeeds in being both scholarly and accessible to the general reader."--Robert McCartney, The Washington Post

“An important addition to the bookshelf of anyone who studies race, particularly in an urban setting, as well as scholars of the District of Columbia.”--Journal of Southern History

“Well-researched and concisely written. . . . Chocolate City is an illuminating study to understand the complex history of race in the nation’s capital.”--Journal of North Carolina Association of Historians

“Asch and Musgrove brilliantly explore the important but overlooked story of the black struggle for freedom, justice, and democracy in our nation’s capital. Meticulously researched and carefully told, Chocolate City is a vital local history that demands and deserves a wide national audience.”--James Forman Jr., author of Locking Up Our Own