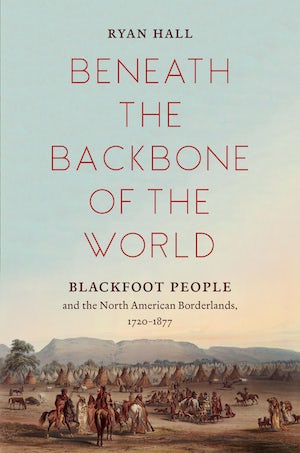 For the better part of two centuries, between 1720 and 1877, the Blackfoot (Niitsitapi) people controlled a vast region of what is now the U.S. and Canadian Great Plains. As one of the most expansive and powerful Indigenous groups on the continent, they dominated the northern imperial borderlands of North America. The Blackfoot maintained their control even as their homeland became the site of intense competition between white fur traders, frequent warfare between Indigenous nations, and profound ecological transformation. In an era of violent and wrenching change, Blackfoot people relied on their mastery of their homelands’ unique geography to maintain their way of life.

With extensive archival research from both the United States and Canada, Ryan Hall shows for the first time how the Blackfoot used their borderlands position to create one of North America’s most vibrant and lasting Indigenous homelands. This book sheds light on a phase of Native and settler relations that is often elided in conventional interpretations of Western history, and demonstrates how the Blackfoot exercised significant power, resiliency, and persistence in the face of colonial change.

“This meticulously researched volume . . . offers a compelling examination of the pivotal role played by the Blackfoot nation in the turbulent history of the northern plains’ borderlands during much of the 18th and 19th centuries. . . . Hall’s mastery of this exceedingly complex history provides important new insights into the continent’s indigenous past, and deserves an appreciative audience.”--CHOICE

“Ryan Hall masterfully illuminates the value of putting Indigenous places at the center of history in his meticulously researched account of Blackfoot efforts to maintain their homeland during the tumultuous changes brought about by British, Canadian, and American encroachment. . . . Hall’s analysis provides a useful methodological approach for scholars of Iowa.”--The Annals of Iowa

“I cannot recommend this book enough; It places trade, especially the fur trade, at the center of tribal significance.  If you can rely on a single volume about the Blackfoot Confederacy, this is the one that covers everything from the evolving fur trade to the establishment of reserves in the United States and Canada.” --Museum of the Fur Trade Quarterly

“Hall has produced a landmark study of the Blackfoot, one that is easy to read, highly accessible, and yet thoroughly scholarly. . . . This is an astonishingly good book.” --H-Net

“Employing crisp prose and engaging vignettes, Hall crafts a coherent and interesting story of how the Blackfoot ’survived, suffered, and prospered’ on the northwestern plains. . . . Those who teach both American and Canadian history will find a gold mine of useful content.” --Ethnohistory

"Ryan Hall’s brilliant exploration of the history of the Blackfoot people reveals a creative and supremely dynamic Indigenous nation that rose, against the odds, to control the vast northwestern plains in the midst of two colonial empires. How they achieved such dominance is astonishing, and how they lost it will push readers to think hard about the legacies of conquest. This is a history full of drama and vital lessons."--Pekka Hämäläinen, University of Oxford