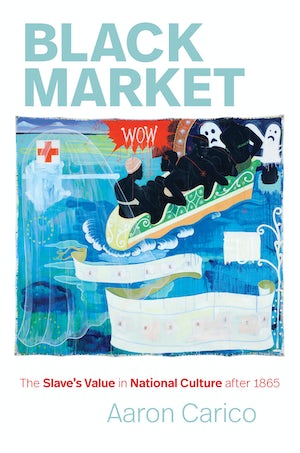 To purchase online via an independent bookstore, visit Bookshop.org
On the eve of the Civil War, the estimated value of the U.S. enslaved population exceeded $3 billion--triple that of investments nationwide in factories, railroads, and banks combined, and worth more even than the South's lucrative farmland. Not only an object to be traded and used, the slave was also a kind of currency, a form of value that anchored the market itself. And this value was not destroyed in the war. Slavery still structured social relations and cultural production in the United States more than a century after it was formally abolished. As Aaron Carico reveals in Black Market, slavery’s engine of capital accumulation was preserved and transformed, and the slave commodity survived emancipation. Through both archival research and lucid readings of literature, art, and law, from the plight of the Fourteenth Amendment to the myth of the cowboy, Carico breaks open the icons of liberalism to expose the shaping influence of slavery's political economy in America after 1865. Ultimately, Black Market shows how a radically incomplete and fundamentally failed abolition enabled the emergence of a modern nation-state, in which slavery still determined--and now goes on to determine--economic, political, and cultural life.

Aaron Carico is a writer based in Brooklyn. He received a PhD in American studies from Yale University.
For more information about Aaron Carico, visit the Author Page.

"Aaron Carico traces the connection between the plantation economy and the rise of corporate culture, demonstrating the mechanisms by which racism and the economic valuation of black bodies continued to structure economic institutions and logic in the United States after emancipation. Charting the transformation of 'slave racial capital' over a broad sweep of the nineteenth and twentieth centuries, Black Market shifts debates in multiple fields of U.S. cultural history."--Shirley E. Thompson, The University of Texas at Austin

"A deeply troubling account of the history--cultural, intellectual, political, and economic--by which American society followed along as, in W. E. B. Du Bois's words, 'The slave went free; stood a brief moment in the sun; then moved back again toward slavery.' A bold and brilliant account of American slavery's tenacious afterlife."--Walter Johnson, Harvard University

"This dazzling work defines a new moment in the study of the history of capitalism in the United States and announces the arrival of an important scholar in that vital area of inquiry. Written with both fierce urgency and beautiful precision, it shows that the afterlives of slavery never became a mere part of the past. Tracing their cultural and political economic presence within and far beyond the African American South, Carico shows slavery enclosing land, lives, imaginations, and political possibilities for a century and a half."--David Roediger, University of Kansas

"Black Market makes a compelling case that the formal 'abolition' of slavery in 1865 was nothing of the sort; it was, rather, a transformation of the institution's logic of value. Carico helps us to see that one of the relations capitalism has to slavery is the ghosting of that relation and, through solid archival sleuthing and dazzling close readings, Carico compels that phantom to materialize. Black Market is a work of complex cerebration and a major accomplishment in the field of American studies."--Stephen M. Best, University of California, Berkeley