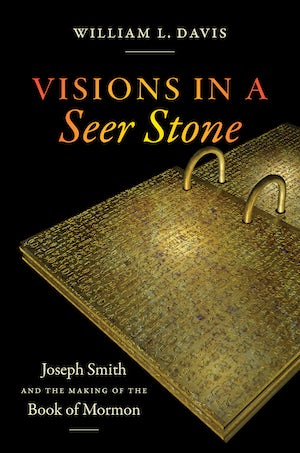 Finalist, 2021 Award for Excellence in the Study of Religion, Textual Studies, American Academy of Religion

In this interdisciplinary work, William L. Davis examines Joseph Smith's 1829 creation of the Book of Mormon, the foundational text of the Latter Day Saint movement. Positioning the text in the history of early American oratorical techniques, sermon culture, educational practices, and the passion for self-improvement, Davis elucidates both the fascinating cultural context for the creation of the Book of Mormon and the central role of oral culture in early nineteenth-century America.

Drawing on performance studies, religious studies, literary culture, and the history of early American education, Davis analyzes Smith’s process of oral composition. How did he produce a history spanning a period of 1,000 years, filled with hundreds of distinct characters and episodes, all cohesively tied together in an overarching narrative? Eyewitnesses claimed that Smith never looked at notes, manuscripts, or books—he simply spoke the words of this American religious epic into existence. Judging the truth of this process is not Davis's interest. Rather, he reveals a kaleidoscope of practices and styles that converged around Smith's creation, with an emphasis on the evangelical preaching styles popularized by the renowned George Whitefield and John Wesley.

“Davis succeeds in providing and analyzing evidence of his thesis in a scholarly fashion, while composing a readable book that can be appreciated by both believers and non-believers in the Book of Mormon and Joseph Smith. . . . Visions in a Seer Stone is an excellent and important addition to Mormon studies.”--Andrew Hamilton, Association for Mormon Letters

“A provocative work of scholarship that not only stands as a convincing reassessment of the Book of Mormon in its own right, but also invites future investigations into the book, its myriad contexts, and its legacy.”--The Dialogue Journal

"Offers exciting potential for future study of the text. . . . One of the great strengths of the book is Davis’ grounding in a nineteenth-century oral culture far distinct from our own; a world of audiences entranced by three-hour sermons delivered by gesticulating preachers holding no notes; a world in which divinity students drilled tirelessly on mnemonic devices to help them capture vast reams of scripture in their minds."--Nova Religio

"Reconsidering the orality of Smith’s Book of Mormon project treads new ground, and Davis’s work will continue to play a role in the burgeoning field of Book of Mormon studies for years to come."--Church History