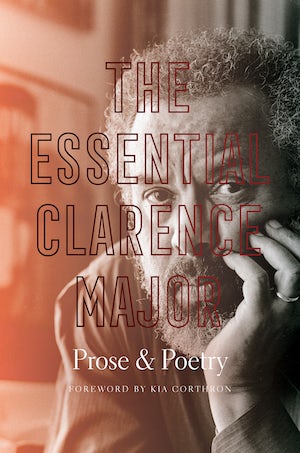 Clarence Major is one of America’s literary masters. He has published numerous books, from novels to poetry and short story collections. Among his many accolades, he was a finalist for the National Book Award and a Fulbright scholar and received the PEN Oakland/Reginald Lockett Lifetime Achievement Award. His work has been featured in many literary journals, newspapers, and magazines, including the New Yorker, the New York Times, and Ploughshares.

Whether you’ve known Major’s work for decades or are new to his singular style, The Essential Clarence Major offers a thrilling overview of an exceptional career, from his early groundbreaking fiction to his most recent poems. Included here are excerpts from Major’s best novels, a selection of his finest short stories and poetry, more than a dozen thought-provoking essays, a taste of his autobiography. Award-winning playwright, novelist, and screenwriter Kia Corthron introduces the collection, artfully illuminating Major’s importance as one of the foremost and original voices in contemporary American literature.

Clarence Major is Distinguished Professor Emeritus of English at the University of California, Davis.
For more information about Clarence Major, visit the Author Page.

Kia Corthron is a playwright and novelist and author of The Castle Cross the Magnet Carter, which was awarded The Center for Fiction First Novel Prize in 2016 and was a New York Times Book Review Editor's Choice. Her plays have been produced in New York, across the United States, and internationally.


For more information about Kia Corthron, visit the Author Page.

"Major . . . has long been recognized by scholars of African American literature; yet unfortunately, this quirky but highly engaging author is far less well known by general readers. This anthology of his fiction, nonfiction, and poetry should help to rectify the situation."--Library Journal, Starred Review

“The Essential Clarence Major bares evidence. This cache of poetry and prose—fiction, essays, and memoir—is timely and brilliant. Major is bold. His sway of truth is delivered calmly and, at times, satirically. There’s no other American voice like his. His sense of history, humor, and love, all are uniquely Clarence Major—the man, the artist.”—Yusef Komunyakaa, author of The Emperor of Water Clocks

"Clarence Major’s attention to the details particular to black life—his ability to capture the real-life surrealistic quality of these details—is only matched by his commitment to a kind of experimentation that expands and defies our ideas about the boundaries of genre. This isn’t just a book of great literature. This is a book of history."—Jericho Brown, author of The Tradition

“To see the decades of Clarence Major's work presented in this way is to confirm that any writer armed with relentless curiosity and a vast toolbox of language can pursue the work in whatever form it arrives to them, be it the long sprawl of fiction or the precise and surgical poetic line. I found myself renewed after spending time with this work. Seeing all of the limits I once imagined slowly vanish.”—Hanif Abdurraqib, author of A Fortune for Your Disaster and Go Ahead in the Rain

“Clarence Major has been so prolific, so eclectic, so multifaceted that it has been difficult for the literary community to get its mind around his oeuvre. The Essential Clarence Major presents a rare opportunity to galvanize and project the literary legacy of one of America’s most important writers, giving readers the rare opportunity to hold a library in one hand. This is an invaluable aid in the teaching of mid-twentieth-century African American poetry and fiction and will provide a tool for students of African American letters to grapple with his work as a whole.”—Randall Kenan, editor of The Cross of Redemption: The Uncollected Writings of James Baldwin

"American renaissance man Clarence Major's gifts are vast: a lexicographer of black slang, an artist, a photographer, an editor and critic, a poet and writer of experimental and conventional fiction. The Essential Clarence Major is not merely an anthology of popular titles—it is the definitive showcase, an introduction for those playing catch-up, a treasure trove for his devotees. This work makes the case that Major's diverse and complex career and his unique literary ambitions belong on the front display table in the American library of literature."—Wilton Barnhardt, author of Lookaway, Lookaway: A Novel and Every True Pleasure: LGBTQ Tales of North Carolina