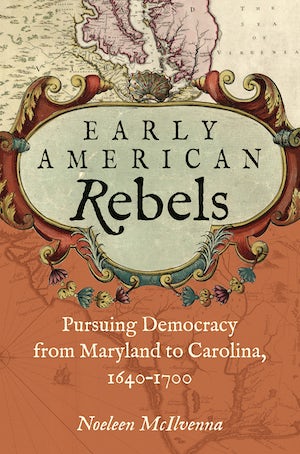 During the half century after 1650 that saw the gradual imposition of a slave society in England’s North American colonies, poor white settlers in the Chesapeake sought a republic of equals. Demanding a say in their own destinies, rebels moved around the region looking for a place to build a democratic political system. This book crosses colonial boundaries to show how Ingle's Rebellion, Fendall's Rebellion, Bacon's Rebellion, Culpeper's Rebellion, Parson Waugh's Tumult, and the colonial Glorious Revolution were episodes in a single struggle because they were organized by one connected group of people.

Adding land records and genealogical research to traditional sources, Noeleen McIlvenna challenges standard narratives that disdain poor whites or leave them out of the history of the colonial South. She makes the case that the women of these families played significant roles in every attempt to establish a more representative political system before 1700. McIlvenna integrates landless immigrants and small farmers into the history of the Chesapeake region and argues that these rebellious anti-authoritarians should be included in the pantheon of the nation’s Founders.

Noeleen McIlvenna is professor of history at Wright State University and author of A Very Mutinous People and The Short Life of Free Georgia.
For more information about Noeleen McIlvenna, visit the Author Page.

“There is much to admire about this book. McIlvenna deftly links English and American events, and her attention to genealogical detail clarifies the importance of family ties in seventeenth-century American politics.” – The Journal of Southern History

"McIlvenna has woven together a rich tapestry of voices from the early Chesapeake, ranging from Maryland and Virginia and down into the North Carolina region, and traces a potent brew of kin and allies between the various uprisings and political conflicts of the seventeenth century, putting them in the context of empire."--Holly Brewer, University of Maryland

"McIlvenna proves that popular challenges to elite social and economic interests shaped and reshaped the transatlantic political culture of the seventeenth-century Chesapeake. Her recovery of the region's largely forgotten freedom struggles could not be more timely, as it empowers, through the creation of a fruitful memory, democratic resistance to the tyrants of our own time."--John Donoghue, Loyola University Chicago