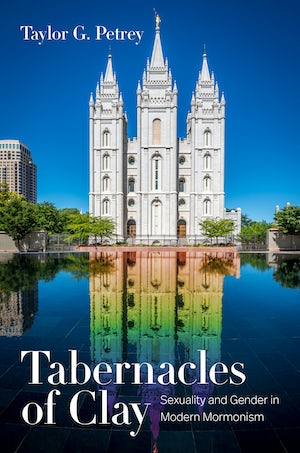 Taylor G. Petrey’s trenchant history takes a landmark step forward in documenting and theorizing about Latter-day Saints (LDS) teachings on gender, sexual difference, and marriage. Drawing on deep archival research, Petrey situates LDS doctrines in gender theory and American religious history since World War II. His challenging conclusion is that Mormonism is conflicted between ontologies of gender essentialism and gender fluidity, illustrating a broader tension in the history of sexuality in modernity itself.

As Petrey details, LDS leaders have embraced the idea of fixed identities representing a natural and divine order, but their teachings also acknowledge that sexual difference is persistently contingent and unstable. While queer theorists have built an ethics and politics based on celebrating such sexual fluidity, LDS leaders view it as a source of anxiety and a tool for the shaping of a heterosexual social order. Through public preaching and teaching, the deployment of psychological approaches to “cure” homosexuality, and political activism against equal rights for women and same-sex marriage, Mormon leaders hoped to manage sexuality and faith for those who have strayed from heteronormativity.

"[A] landmark work on gender and sexuality in Mormon thought. . . . Information-packed, with a forceful thesis and jargon-free prose, this is an important contribution to Mormon studies as well as a convincing consideration of the ways religions construct and maintain frameworks. Any academic studying the intersection of religious practice and progressive social change will want to pick this up."--Publishers Weekly, starred review

"A brilliant exception to studies of sexuality, gender, and religion that too often focus on a narrow subject and don’t speak to broader concerns of larger issues in history and society. . . . Petrey writes beautifully, offering readers across a wide variety of academic fields, including religious studies and the history of sexuality, an elegant intellectual text that will please casual readers as well. Highly recommended."--Library Journal, starred review

“Meticulously researched and well-balanced in structure and argument, Petrey’s book provides new insights into the church’s relationship with gender and sexuality policies. . . . Accessible and addictive in content, this book comes highly recommended.”--Segullah

“Petrey . . . looks at how post–WW II political, social, and cultural transformations shaped LDS church leaders’ conceptions of race, sexuality, and gender. . . . Adding nuance to the history of Mormonism, Petrey’s book is a remarkable addition to the literature.”--CHOICE

"A fascinating, invaluable resource for those interested in Mormon ideas of sexuality and gender."--Association for Mormon Letters

“Petrey’s work bridges a gap in the field of Mormon studies where the study of women is often separated from the study of LGBTQ+ sexuality, obscuring ‘a fundamental overlap between these two issues.’” – Journal of the American Academy of Religion