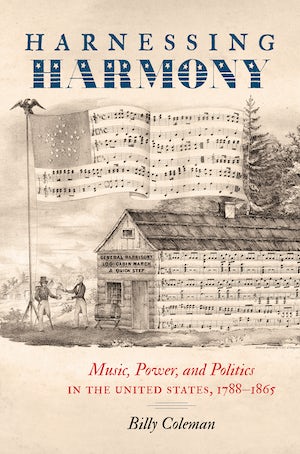 Listen to the Music

Following the creation of the United States, profound disagreements remained over how to secure the survival of the republic and unite its diverse population. In this pathbreaking account, Billy Coleman uses the history of American music to illuminate the relationship between elite power and the people from the early national period to the Civil War. Based on deep archival research in sources such as music periodicals, songbooks, and manuals for musical instruction, Coleman argues that a particular ideal of musical power provided conservative elites with an attractive road map for producing the harmonious union they desired. He reassesses the logic behind the decision to compose popular patriotic anthems like "The Star-Spangled Banner," reconsiders the purpose of early American campaign songs, and brings to life a host of often forgotten but fascinating musical organizations and individuals. The result is not only a striking interpretation of music in American political life but also a fresh understanding of conflicts that continue to animate American democracy.

Billy Coleman is a postdoctoral fellow in early American history with the Kinder Institute on Constitutional Democracy at the University of Missouri.
For more information about Billy Coleman, visit the Author Page.

“Those who grew up in the last third of the 20th century are used to seeing music as a tool of protest and as a means of bringing the perspective of unseen communities to the attention of the mainstream. Harnessing Harmony tells a very different story. . . . This book makes a well-argued case for a surprising aspect of music in societal and political life in the early early years of the US.”—Choice Reviews

“An insightful narrative . . . Harnessing Harmony will likely inspire further research into the complex alliances and ideological resonances across divisions of party, religion, class, region, and race that gave rise to this musical conservatism.”—NC Historical Review

“Coleman captivates the musical spirit of American political culture from the early republic era onwards, showing how political musical traditions grew, developed a level of social significance in the antebellum period, and helped establish individual cultural identities by the Civil War. . . . It is an authoritative and accessible study into how meaning can be expressed through musical melodies and song singing, revealing how cultural identity has proved just as critical as political viewpoints in shaping American society.”—American Nineteenth Century History

“Harnessing Harmony challenges the oft-held view that populist music was primarily exercised to confront those in power; rather, in Coleman’s analyses, popular music was a tool 'elite Americans consistently and adaptively' used 'as a means of social control' . . . cogent and compelling.”—Journal of the Early Republic

“Harnessing Harmony is well written and moves at a quick pace. It is a tour de force of archival research… clearly demonstrates that the fields of political history and musicology still have much to learn from one another.”—Journal of the Civil War Era

“Coleman has read widely and thought deeply about the provocative entanglements between music and political culture. . . . [B]rimming with tantalizing, intriguing insights and discussions that will be valuable to other scholars.”—The Journal of Southern History