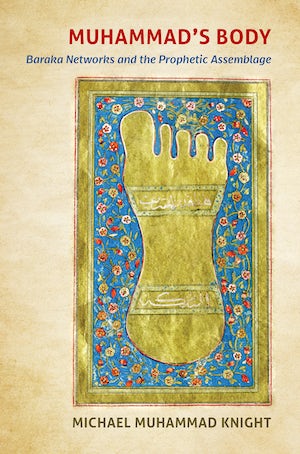 Muhammad’s Body introduces questions of embodiment and materiality to the study of the Prophet Muhammad. Analyzing classical Muslim literary representations of Muhammad’s body as they emerge in Sunni hadith and sira from the eighth through the eleventh centuries CE, Michael Muhammad Knight argues that early Muslims’ theories and imaginings about Muhammad’s body contributed in significant ways to the construction of prophetic masculinity and authority.

Knight approaches hadith and sira as important religiocultural and literary phenomena in their own right. In rich detail, he lays out the variety of ways that early believers imagined Muhammad’s relationship to beneficent energy—baraka—and to its boundaries, effects, and limits. Drawing on insights from contemporary theory about the body, Knight shows how changing representations of the Prophet’s body helped to legitimatize certain types of people or individuals as religious authorities, while marginalizing or delegitimizing others. For some Sunni Muslims, Knight concludes, claims of religious authority today remain connected to ideas about Muhammad’s body.

"A stimulating academic analysis of writings about the way Muhammad’s body supposedly blessed others during his lifetime and after his death. . . . [Knight] offers fresh insights into Muslim masculinity, esotericism, and power. This is an erudite, provocative tour de force."--Publishers Weekly

“[Knight] takes the reader on a well-researched and impeccably sourced journey. . . . Muhammad's Body: Baraka Networks and the Prophetic Assemblage give[s] readers a deeper understanding of the complexity of Islam in particular, and religious belief in general.”--Qantara.de

"A much-needed advance. . . . This richly researched and theoretically robust work adds significantly to scholarly understandings of how Muhammad came to hold a diverse array of meanings for Muslims throughout the whole course of Islamic history."--Journal of Religious History

"Thought-provoking and compelling. . . . The book is unusually successful in speaking to audiences across conventional divides of academic level, scholarly discipline, and religious commitment. Knight writes unusually well, displaying a light touch and a gift for the memorable phrase."--Journal of the American Academy of Religion

“This groundbreaking, theoretically sophisticated book eloquently demonstrates the potential of applying theory to the study of hadiths. It will be sought after for teaching in Islamic studies and religious studies as well as gender studies.”—Aisha Geissinger, Carleton University

“Michael Knight presents the reader with a picture of the Prophet Muhammad as a boundary-breaking body that manages flows of baraka, or blessing, through its corporeal connection to other bodies. Engaging issues that are in hot debate—the status of hadith reports and proper methods of interpretation, gender and sexuality, and power hierarchies in Islamic culture—this is a vigorous and powerful book.”—Scott Kugle, Emory University