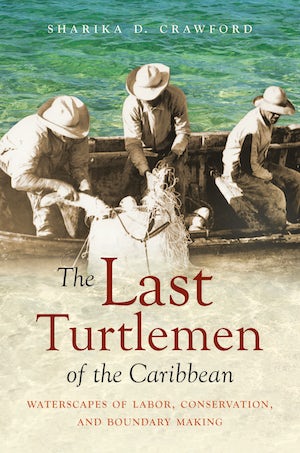 Illuminating the entangled histories of the people and commodities that circulated across the Atlantic, Sharika D. Crawford assesses the Caribbean as a waterscape where imperial and national governments vied to control the profitability of the sea. Crawford places the green and hawksbill sea turtles and the Caymanian turtlemen who hunted them at the center of this waterscape. The story of the humble turtle and its hunter, she argues, came to play a significant role in shaping the maritime boundaries of the modern Caribbean.

Crawford describes the colonial Caribbean as an Atlantic commons where all could compete to control the region’s diverse peoples, lands, and waters and exploit the region’s raw materials. Focusing on the nineteenth and twentieth centuries, Crawford traces and connects the expansion and decline of turtle hunting to matters of race, labor, political and economic change, and the natural environment. Like the turtles they chased, the boundary-flouting laborers exposed the limits of states’ sovereignty for a time but ultimately they lost their livelihoods, having played a significant role in legislation delimiting maritime boundaries. Still, former turtlemen have found their deep knowledge valued today in efforts to protect sea turtles and recover the region’s ecological sustainability.

"A compelling and insightful study of the human and nonhuman relationships that shaped the important Caribbean industry of turtling, with a focus on the nineteenth and twentieth centuries."—American Historical Review

"Crawford’s book is a timely reminder that the sea has long been at the center of regional debates… expertly woven narrative of a fishery in decline could be superimposed upon any community of fishers in the Caribbean today."—H-LatAm

"A valuable maritime perspective of the Caribbean past."—World History Connected

"A great resource for teaching . . . [will appeal] to historians of all sorts; whether one is interested in transnational governance, labor and empire, or environmental change and conservation, there is a chapter for you in this book.”—Low Countries Journal of Social and Economic History

“This may be the first book to consider marine animals—mainly the green and hawksbill turtles—as an organizing principle to examine society and empire. Bringing the humble turtle into conversation with state power and control, Sharika Crawford takes you on the ships and into the hunt to investigate the ideas, people, and commodities that so intimately connected a diaspora of animal-seekers and their communities. These men and these turtles reshape how we think about the slippery interfaces between humans and the sea, societies and animals, the Caribbean and the world.”—Emily Wakild, Boise State University

“Compellingly explores Caribbean turtlemen’s social and economic roles from the colonial era to the early twentieth century. Combining environmental and labor history with commodity studies, Crawford shows how the survival of sea turtles and the working people whose livelihoods depended upon increasingly endangered species became intertwined within the fragile ecology of the Caribbean.”—Jennifer L. Anderson, Stony Brook University