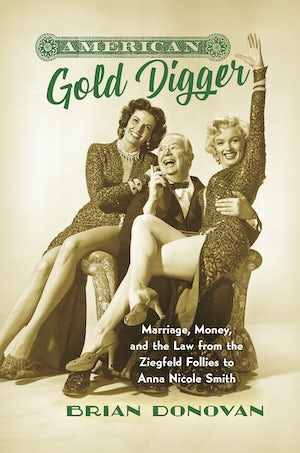 The stereotype of the "gold digger" has had a fascinating trajectory in twentieth-century America, from tales of greedy flapper-era chorus girls to tabloid coverage of Anna Nicole Smith and her octogenarian tycoon husband. The term entered American vernacular in the 1910s as women began to assert greater power over courtship, marriage, and finances, threatening men’s control of legal and economic structures. Over the course of the century, the gold digger stereotype reappeared as women pressed for further control over love, sex, and money while laws failed to keep pace with such realignments. The gold digger can be seen in silent films, vaudeville jokes, hip hop lyrics, and reality television. Whether feared, admired, or desired, the figure of the gold digger appears almost everywhere gender, sexuality, class, and race collide.

Brian Donovan is professor of sociology at the University of Kansas.
For more information about Brian Donovan, visit the Author Page.

"Donovan demonstrates how the gold digger stereotype emerged and reappeared over the course of the twentieth century as both comic relief and grave threat to the family. Donovan’s attention to the racial politics of the gold digger stereotype mark an important contribution to histories that link the production of heterosexuality with the history of racial formation."--Rebecca L. Davis, author of More Perfect Unions: The American Search for Marital Bliss

"Brian Donovan has found a surprisingly original subject; the gold digger clearly deserves her time in the historical spotlight. Donovan is a first-rate storyteller--American Gold Digger successfully walks the line between analytical rigor and ease of reading."--Kristin Celello, author of Making Marriage Work: A History of Marriage and Divorce in the Twentieth-Century United States