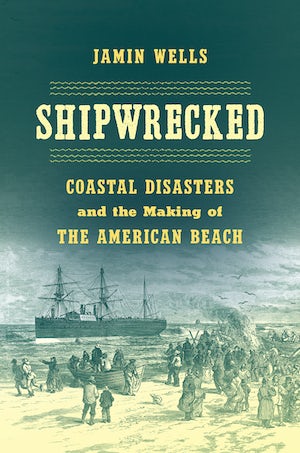 Reframing the American story from the vantage point of the nation's watery edges, Jamin Wells shows that disasters have not only bedeviled the American beach--they created it. Though the American beach is now one of the most commercialized, contested, and engineered places on the planet, few people visited it or called it home at the beginning of the nineteenth century. By the twentieth century, the American beach had become the summer encampment of presidents, a common destination for millions of citizens, and the site of rapidly growing beachfront communities. Shipwrecked tells the story of this epic transformation, arguing that coastal shipwrecks themselves changed how Americans viewed, used, and inhabited the shoreline.

Drawing on a broad range of archival material--including logbooks, court cases, personal papers, government records, and cultural ephemera--Wells examines how shipwrecks laid the groundwork for the beach tourism industry that would transform the American beach from coastal frontier to oceanfront playspace, spur substantial state and private investment alongshore, reshape popular ideas about the coast, and turn the beach into a touchstone of the American experience.

Jamin Wells is assistant professor of history at the University of West Florida.
For more information about Jamin Wells, visit the Author Page.

“Joining the cognitive landscape with the historical narrative from wreck-laden American century is no small effort, yet Wells does so with an accurate brevity and deft hand.” – Sea History

“[A] bold yet convincing argument. . . . Shipwrecked is a valuable contribution to a new wave of coastal and marine histories.” --The North Carolina Historical Review

“Shipwrecked brilliantly takes a subject that has been overlooked by historians—or has been written off as only within the scope of maritime archaeologists—and shows how it played a key role in the emergence of coastal tourism and development.” — H-Nationalism

"By layering the cultural with the regulatory, the environmental, the spectacular, and the commercial, this important book adds to our understanding of the unique cultural and physical forces humans encountered and created on the American shoreline."--Matthew McKenzie, University of Connecticut