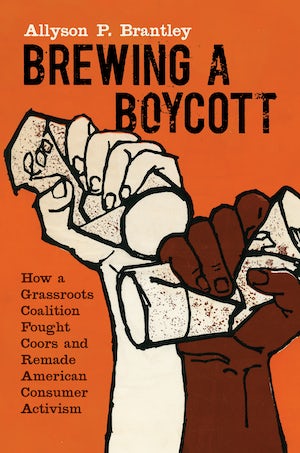 In the late twentieth century, nothing united union members, progressive students, Black and Chicano activists, Native Americans, feminists, and members of the LGBTQ+ community quite as well as Coors beer. They came together not in praise of the ice cold beverage but rather to fight a common enemy: the Colorado-based Coors Brewing Company. Wielding the consumer boycott as their weapon of choice, activists targeted Coors for allegations of antiunionism, discrimination, and conservative political ties. Over decades of organizing and coalition-building from the 1950s to the 1990s, anti-Coors activists molded the boycott into a powerful means of political protest.

In this first narrative history of one of the longest boycott campaigns in U.S. history, Allyson P. Brantley draws from a broad archive as well as oral history interviews with long-time boycotters to offer a compelling, grassroots view of anti-corporate organizing and the unlikely coalitions that formed in opposition to the iconic Rocky Mountain brew. The story highlights the vibrancy of activism in the final decades of the twentieth century and the enduring legacy of that organizing for communities, consumer activists, and corporations today.

Allyson P. Brantley is assistant professor of history and Director of Honors & Interdisciplinary Initiatives at the University of La Verne.
For more information about Allyson P. Brantley, visit the Author Page.

“This impressive book sheds new light on the history of intersectional activism and conservative politics, as well as labor and business history. It is one of the most clarifying, empirically rich analyses of post-1960s activism ever written.” – Pacific Historical Review

"Brewing a Boycott is an energizing, engaging, and richly researched account of the multiple coalitions that won power through the years-long boycott of Coors Beer."--Emily K. Hobson, author of Lavender and Red: Liberation and Solidarity in the Gay and Lesbian Left

"A concise, accessible, and eminently readable history of the Coors boycott. Activists are front and center in this comprehensive look at the campaign in all of its complexity and permutations."--Lauren Araiza, author of To March for Others: The Black Freedom Struggle and the United Farm Workers

“Allyson Brantley has produced a remarkable history of the Coors boycott, convincingly showing why we should regard it as one of the American left’s defining struggles in the 1970s and ‘80s. With a broad narrative sweep and impressive research, Brewing a Boycott reveals how a broad coalition of unions, Chicano organizers, civil rights activists, and gay and lesbian liberation groups waged a decades-long struggle for workers’ rights, even as the Coors family became national leaders in the era’s ascendant conservative movement.”—Joshua Clark Davis, author of From Head Shops to Whole Foods: The Rise and Fall of Activist Entrepreneurs