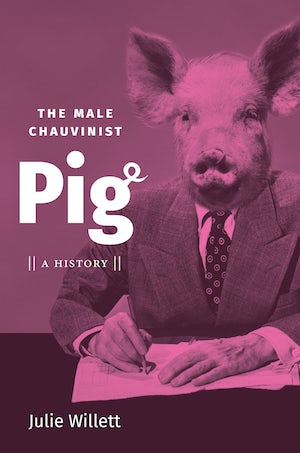 To purchase online via an independent bookstore, visit Bookshop.org
In the social upheavals of the 1960s and 1970s, a series of stock characters emerged to define and bolster white masculinity. Alongside such caricatures as "the Playboy" and "the Redneck" came a new creation: "the Male Chauvinist Pig." Coined by second-wave feminists as an insult, the Male Chauvinist Pig was largely defined by an anti-feminism that manifested in boorish sexist jokes. But the epithet backfired: being a sexist pig quickly transformed into a badge of honor worn proudly by misogynists, and, in time, it would come to define a strain of right-wing politics. Historian Julie Willett tracks the ways in which the sexist pig was sanitized by racism, popularized by consumer culture, weaponized to demean feminists, and politicized to mobilize libertine sexists to adopt reactionary politics.

Mapping out a trajectory that links the sexist buffoonery of Bobby Riggs in the 1970s, the popularity of Rush Limbaugh’s screeds against "Feminazis" in the 1990s, and the present day misogyny underpinning Trumpism, Willett makes a case for the potency of this seemingly laughable cultural symbol, showing what can happen when we neglect or trivialize the political power of humor.

Julie Willett is professor of history at Texas Tech University.
For more information about Julie Willett, visit the Author Page.

"This is an exciting and fascinating history written in a playful and spirited style."--Natasha Zaretsky, author of Radiation Nation: Three Mile Island and the Political Transformation of the 1970s

"A lively and highly rewarding book that flows beautifully, with thought-provoking meaning packed into every paragraph."--Amy Bix, author of ‘Girls Coming to Tech!’: A History of American Engineering Education for Women