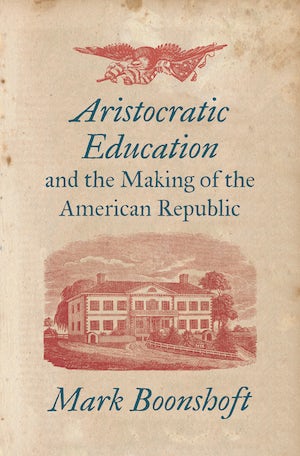 Following the American Revolution, it was a cliché that the new republic's future depended on widespread, informed citizenship. However, instead of immediately creating the common schools--accessible, elementary education--that seemed necessary to create such a citizenry, the Federalists in power founded one of the most ubiquitous but forgotten institutions of early American life: academies, privately run but state-chartered secondary schools that offered European-style education primarily for elites. By 1800, academies had become the most widely incorporated institutions besides churches and transportation projects in nearly every state.

In this book, Mark Boonshoft shows how many Americans saw the academy as a caricature of aristocratic European education and how their political reaction against the academy led to a first era of school reform in the United States, helping transform education from a tool of elite privilege into a key component of self-government. And yet the very anti-aristocratic critique that propelled democratic education was conspicuously silent on the persistence of racial and gender inequality in public schooling. By tracing the history of academies in the revolutionary era, Boonshoft offers a new understanding of political power and the origins of public education and segregation in the United States.

Mark Boonshoft is executive director of the American Society for Eighteenth-Century Studies.
For more information about Mark Boonshoft, visit the Author Page.

“Exceptional in most every regard . . . thoroughly compelling. Historians of education, and of American history more generally, would do well to emulate [Boonshoft’s] approach.” --Journal of Southern History

“A deeply researched, well-written and unfailingly interesting contribution to the historiography of education and education reform in Colonial and Revolutionary America and the antebellum United States.” --History of Education

“Incisive and insightful. . . . More than just a history of education, it is an account of the political conflicts and compromises that shaped the early republic.” --Journal of American Studies

“[Boonshoft] makes a compelling argument that the flowering of academies was a significant, if relatively short- lived, development in American civic life.”—Journal of American History

“A thoughtful analysis of the emergence and evolution of educational institutions known as academies from the colonial era through the early antebellum period in the United States. . . . Boonshoft’s work helps to situate the role of academies in the larger narrative of American education.”—American Historical Review