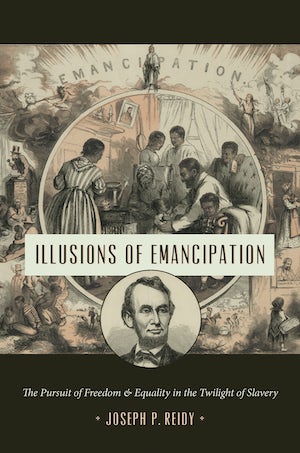 As students of the Civil War have long known, emancipation was not merely a product of Lincoln's proclamation or of Confederate defeat in April 1865. It was a process that required more than legal or military action. With enslaved people fully engaged as actors, emancipation necessitated a fundamental reordering of a way of life whose implications stretched well beyond the former slave states. Slavery did not die quietly or quickly, nor did freedom fulfill every dream of the enslaved or their allies. The process unfolded unevenly.

In this sweeping reappraisal of slavery's end during the Civil War era, Joseph P. Reidy employs the lenses of time, space, and individuals' sense of personal and social belonging to understand how participants and witnesses coped with drastic change, its erratic pace, and its unforeseeable consequences. Emancipation disrupted everyday habits, causing sensations of disorientation that sometimes intensified the experience of reality and sometimes muddled it. While these illusions of emancipation often mixed disappointment with hope, through periods of even intense frustration they sustained the promise that the struggle for freedom would result in victory.

"Reidy's important book shows that the movement toward freedom was neither linear nor inevitable but was and must be constant. In that, he speaks to not only history but our own day."--Library Journal

"[A] comprehensive analysis of of the journey from slavery to freedom. . . . Explaining the complex and changing concept of home is Reidy's most insightful historiographic contribution. He demonstrates that establishing a new home was much more than a physical endeavor for newly freed people. It involved establishing a distinct identity in relation to the new political, economic, and social order."--Civil War Times

“As one of the field’s senior scholars, Reidy brings to bear decades of immersion in the relevant primary sources. . .[and] demonstrates an impressive mastery of the secondary literature. This powerfully written and deeply researched book. . . will be welcomed by scholars who are just beginning their study of slavery in the U.S. as well as specialists.”--The Civil War Monitor

“Reidy peers into the lives of enslaved people during emancipation, paying special attention to their experiences under Confederate authority.”--Choice Reviews

“An engrossing and textured account of the emancipation process that reveals the myriad ways in which it was experienced and understood by black Americans. . . . Anyone wanting to comprehend Civil War emancipation from the vantage point of people of African descent should place this book at the top of their reading list.”--Virginia Magazine

“Restore[s] to view the raw, lived immediacy of emancipation. . . . Peering through three prisms familiar to Civil War Americans, Reidy’s book demonstrates the constant reckoning that the conflict demanded of the enslaved.”--Journal of the Shenandoah Valley During the Civil War Era