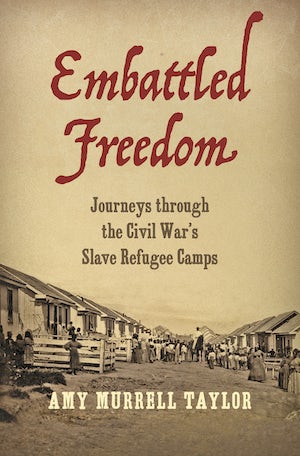 Governor's Book Award, Kentucky Historical Society and the Office of the Governor

Amy Murrell Taylor is T. Marshall Hahn Jr. Professor of History at the University of Kentucky and author of The Divided Family in Civil War America.
For more information about Amy Murrell Taylor, visit the Author Page.

"Gracefully written and exhaustively researched, Taylor’s book offers the reader a vivid and convincing narrative of these slave refugee camps as 'an elemental part of the story of slavery’s destruction in the United States,' one that deserves a broad readership among not only Civil War enthusiasts but anyone interested in the history of race and slavery in the United States."--Publishers Weekly, starred review

“A fine example of the latest approach to the study of the Civil War. . . . An important book because it shows clearly that, despite Civil War mythology, the conflict did not result in immediate freedom.”--Civil War Book Review

“A well-written, thoroughly documented, thought-provoking, if not always uplifting, book about an overlooked aspect of America’s Civil War.”--The Journal of America’s Military Past

“An insightful and powerful book that highlights the tremendous struggle and endurance of the refugees to secure their freedom in the chaos of a massive war while surrounded by a hostile and armed white population. . . . Taylor’s work illustrates the importance of . . . refugee camps as sites of emancipation and the struggle to define freedom during the Civil War.”--Journal of Arizona History

“Taylor has written perhaps the single-most evocative portrayal of wartime refugees in the field’s distinguished history. . . .  In patient, concrete prose, and by “slowing down the pace of the traditional emancipation narrative,” Taylor elicits not just sympathy or terror or excitement but genuine suspense.”—Reviews in American History

“Embattled Freedom is a profound meditation on the nature of warfare and its relation to freedom and citizenship.  Amy Murrell Taylor demonstrates not only her expertise as a military and social historian but also her skill as a thinker and writer. This book is a model for scholars and students alike.”--Journal of Social History