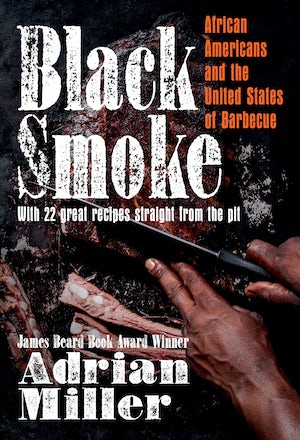 Across America, the pure love and popularity of barbecue cookery have gone through the roof. Prepared in one regional style or another, in the South and beyond, barbecue is one of the nation's most distinctive culinary arts. And people aren’t just eating it; they’re also reading books and articles and watching TV shows about it. But why is it, asks Adrian Miller—admitted ’cuehead and longtime certified barbecue judge—that in today’s barbecue culture African Americans don't get much love?

In Black Smoke, Miller chronicles how Black barbecuers, pitmasters, and restauranteurs helped develop this cornerstone of American foodways and how they are coming into their own today. It's a smoke-filled story of Black perseverance, culinary innovation, and entrepreneurship. Though often pushed to the margins, African Americans have enriched a barbecue culture that has come to be embraced by all. Miller celebrates and restores the faces and stories of the men and women who have influenced this American cuisine. This beautifully illustrated chronicle also features 22 barbecue recipes collected just for this book.

Adrian Miller is a certified Kansas City Barbecue Society judge and recipient of a James Beard Foundation Book Award for Soul Food: The Surprising Story of an American Cuisine, One Plate at a Time. A consultant on Netflix's Chef's Table BBQ, Miller's most recent book is The President's Kitchen Cabinet: The Story of the African Americans Who Have Fed Our First Families, from the Washingtons to the Obamas.
For more information about Adrian Miller, visit the Author Page.

“Black Smoke chronicles a rich culinary contribution . . . [Miller] details the history of barbecue back to its Indigenous roots in pre-Columbian days, and recounts how it became part of the culture of enslaved Africans.”—New York Times

“A trailblazing new volume that catalogues the contributions of Black men and women to American barbecue . . . rigorous scholarship . . . Miller is creating a lexicon to ensure that these Black contributions to American culture can’t be written out of history.”—Washington Post

“Adrian Miller marshals considerable evidence to show in Black Smoke, his thorough, scholarly, enjoyable study [revealing that] barbecue is deeply rooted in African-American history and culture. . . . Miller’s book highlights the fundamental racial interconnectedness that lies at the heart of American life, and the American table.”—The Economist

"An engaging storyteller, Miller brings his subjects to vivid life, as in the chapter on Black barbecue entrepreneurship, which predates Emancipation, with enslaved men and women using their business proceeds to buy freedom. He explores what makes the Black barbecue aesthetic exceptional and the many complexities of etiquette. . . . [and] provides plenty of mouthwatering recipes by Black barbecue artists for sauce, meat and fish, and side dishes as well as profiles of unsung Black barbecue trailblazers across three centuries. . . . A highly entertaining, celebratory, and essential reader for history buffs and barbecue lovers alike."—Starred Review, Kirkus Reviews