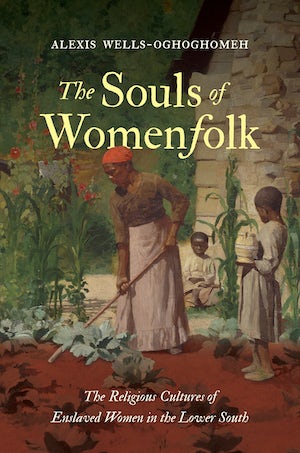 Beginning on the shores of West Africa in the sixteenth century and ending in the U.S. Lower South on the eve of the Civil War, Alexis Wells-Oghoghomeh traces a bold history of the interior lives of bondwomen as they carved out an existence for themselves and their families amid the horrors of American slavery. With particular attention to maternity, sex, and other gendered aspects of women’s lives, she documents how bondwomen crafted female-centered cultures that shaped the religious consciousness and practices of entire enslaved communities. Indeed, gender as well as race co-constituted the Black religious subject, she argues—requiring a shift away from understandings of “slave religion” as a gender-amorphous category.

Women responded on many levels—ethically, ritually, and communally—to southern slavery. Drawing on a wide range of sources, Wells-Oghoghomeh shows how they remembered, reconfigured, and innovated beliefs and practices circulating between Africa and the Americas. In this way, she redresses the exclusion of enslaved women from the American religious narrative. Challenging conventional institutional histories, this book opens a rare window onto the spiritual strivings of one of the most remarkable and elusive groups in the American experience.


For more information about Alexis Wells-Oghoghomeh, visit the Author Page.

"An astute unpacking of the experiences of enslaved African American women. . . . Throughout, the insightful excavation of historical records and bold theorizing create a convincing image of enslaved women’s lives and concerns. This important work will expand academics’ understanding of race and religion in the South."--Publishers Weekly, starred review

“Groundbreaking academic study…Wells-Oghoghomeh shows how the religious imaginations of enslaved women were deeply rooted in understandings of gender—and how those religious experiences gave shape not only to “the souls of womenfolk” but also to the communities around them.” – Christian Century

“One of the most important books in African American religious history of the past decade. . . . The book is a triumph.”—Civil War Book Review

"This book will be difficult for many, but it is very important for the understanding of the enslaved community and its descendants."Reading Religion

“A novel interpretation of African American religiosity that centers the experiences of Black women who drew on a range of cultural sources to build a robust cosmology and worldview that has been too long overlooked. Perhaps most striking, Alexis Wells-Oghoghomeh argues that ideas about gender in Africa and the Americas provided much of the ideological framework upon which slavery was built. A signal contribution to Black religious history as well as to the history of slavery and the transatlantic slave trade.”—Jason R. Young, University of Michigan