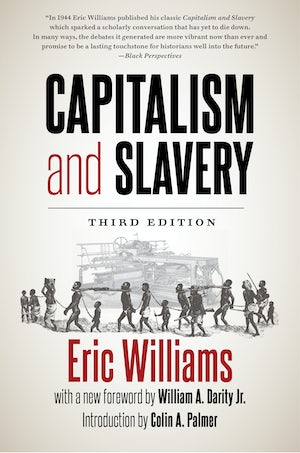 Available in the UK from Penguin Books Ltd.

To purchase online via an independent bookstore, visit Bookshop.org
Slavery helped finance the Industrial Revolution in England. Plantation owners, shipbuilders, and merchants connected with the slave trade accumulated vast fortunes that established banks and heavy industry in Europe and expanded the reach of capitalism worldwide. Eric Williams advanced these powerful ideas in Capitalism and Slavery, published in 1944. Years ahead of its time, his profound critique became the foundation for studies of imperialism and economic development. Binding an economic view of history with strong moral argument, Williams's study of the role of slavery in financing the Industrial Revolution refuted traditional ideas of economic and moral progress and firmly established the centrality of the African slave trade in European economic development. He also showed that mature industrial capitalism in turn helped destroy the slave system. Establishing the exploitation of commercial capitalism and its link to racial attitudes, Williams employed a historicist vision that set the tone for future studies.

William A. Darity Jr.'s new foreword highlights Williams's insights for a new generation of readers, and Colin Palmer's introduction assesses the lasting impact of Williams's groundbreaking work and analyzes the heated scholarly debates it generated when it first appeared.

Eric Williams (1911-1981) served as the first prime minister of independent Trinidad and Tobago beginning in 1962 until his death. Prior to entering politics, he was a professor of social and political science at Howard University.
For more information about Eric Williams, visit the Author Page.

Colin A. Palmer was a leading historian of the Caribbean and the African diaspora. He chronicles the history of the Caribbean in the wake of British and U.S. imperialism in the trilogy comprised of Freedom’s Children, Cheddi Jagan and the Politics of Power, and Eric Williams and the Making of the Modern Caribbean.
For more information about Colin A. Palmer, visit the Author Page.

"[This] new edition of Capitalism and Slavery, published by the University of North Carolina Press with a foreword by the economist William Darity, reminds us in particular of Williams’s independent political and intellectual spirit and how his scholarship upended the historiographical consensus on slavery and abolition."--The Nation

"In 1944 Eric Williams published his classic Capitalism and Slavery which sparked a scholarly conversation that has yet to die down. In many ways, the debates it generated are more vibrant now than ever and promise to be a lasting touchstone for historians well into the future."--Black Perspectives

"Published in America in 1944, Capitalism and Slavery ignited a long-running academic controversy. A new edition this year — a small miracle for a work of strict economic history almost eighty years old — asks us to consider the legacy of a book that virtually invented the modern study of abolitionism."--Jacobin

“Few books stand the test of time and remain a catalyst for continuing historiographical debate. Capitalism and Slavery on all accounts is one of these rare books.”--Anthony Bogues, Asa Messer Professor of Humanities & Critical Theory and Inaugural Director of the Center for the Study of Slavery & Justice, Brown University 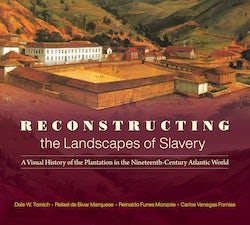