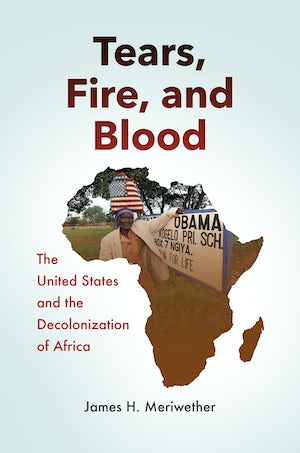 To purchase online via an independent bookstore, visit Bookshop.org
In the mid-twentieth century, the struggle against colonial rule fundamentally reshaped the world and the lives of the majority of the world's population. Decolonization, Black and Brown freedom movements, the establishment of the United Nations and NATO, an exploding Cold War, a burgeoning world human rights movement, all became part of the dramatic events that swept through Africa at a furious pace, with fifty nations gaining independence in roughly fifty years. Meanwhile, the United States emerged as the most powerful and influential nation in the world, with the ability—politically, economically, militarily—and principles to help or hinder the transformation of the African continent.

Tears, Fire, and Blood offers a sweeping history of how the United States responded to decolonization in Africa. James H. Meriwether explores how Washington, grappling with national security interests and racial prejudices, veered between strengthening African nationalist movements seeking majority rule and independence and bolstering anticommunist European allies seeking to maintain white rule. Events in Africa helped propel the Black freedom struggle around the world and ultimately forced the United States to confront its support for national ideals abroad as it fought over how to achieve equality at home.

James H. Meriwether is professor of history at California State University, Channel Islands, and author of Proudly We Can Be Africans: Black Americans and Africa, 1936–1961.
For more information about James H. Meriwether, visit the Author Page.

"This is the first comprehensive modern history of Washington’s involvement with Africa from WW II to the 1990s. . . . Meriwether has dug diligently into both the seamy and more enlightened sections of the archives. Much in his account is new and shameful. . . . Recommended."—CHOICE

“A sweeping narrative and explanation of how the United States, particularly the U.S. government, responded to the liberation of Africa from colonial bondage.... [T]his is a big story, and well told.”—Thomas Borstelmann, author of Just Like Us: The American Struggle to Understand Foreigners

"Meriwether skillfully fuses ‘top-down’ accounts of U.S. diplomacy with the ‘bottom-up’ anticolonial actions of activists to provide a multifaceted account of this relationship that emphasizes the agency of nongovernmental actors in shaping how the United States engaged with the African continent."—Nicholas Grant, author of Winning Our Freedoms Together: African Americans and Apartheid, 1945-1960