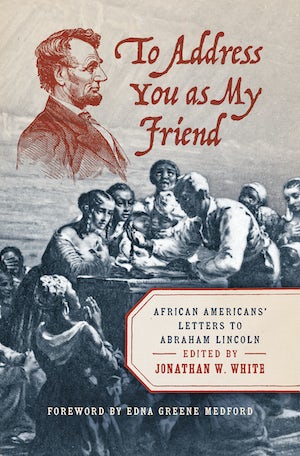 Many African Americans of the Civil War era felt a personal connection to Abraham Lincoln. For the first time in their lives, an occupant of the White House seemed concerned about the welfare of their race. Indeed, despite the tremendous injustice and discrimination that they faced, African Americans now had confidence to write to the president and to seek redress of their grievances. Their letters express the dilemmas, doubts, and dreams of both recently enslaved and free people in the throes of dramatic change. For many, writing Lincoln was a last resort. Yet their letters were often full of determination, making explicit claims to the rights of U.S. citizenship in a wide range of circumstances.

This compelling collection presents more than 120 letters from African Americans to Lincoln, most of which have never before been published. They offer unflinching, intimate, and often heart-wrenching portraits of Black soldiers’ and civilians’ experiences in wartime. As readers continue to think critically about Lincoln’s image as the “Great Emancipator,” this book centers African Americans’ own voices to explore how they felt about the president and how they understood the possibilities and limits of the power vested in the federal government.

Jonathan W. White is associate professor of American studies at Christopher Newport University and author or editor of several previous books, including Midnight in America: Darkness, Sleep, and Dreams during the Civil War.
For more information about Jonathan W. White, visit the Author Page.

“…[O]riginal and gripping…These letters provide telling examples of the ways that Black Americans, free and enslaved, proactively and persistently sought liberty by word and deed and laid claim to the rights and responsibilities of citizenship: a truth as pertinent and pressing in the 21st century as during Lincoln’s day…White adds immeasurably to the value of the letters by providing informative historical context and relating the disposition of the letter-writers’ requests.”--Library Journal

"White, with an expert editor’s touch, has deftly assembled a wonderfully rich and fascinating mosaic of the hopes, dreams, and frustrations of African Americans during the Civil War."—The Civil War Monitor

“Drawing on a painstakingly and imaginatively created archive, this important book brings to life the most human aspects of African American life during the emancipation process.”—John David Smith, coeditor of The Long Civil War: New Explorations of America’s Enduring Conflict

"Jonathan White’s extraordinary scholarship has unearthed a world of Black experience in the Civil War, of Black Americans finding their voices and gaining their agency—and establishing a relationship with the first president they believed cared about their conditions and concerns."—Sidney Blumenthal, author of All the Powers of Earth: The Political Life of Abraham Lincoln 1856–1860