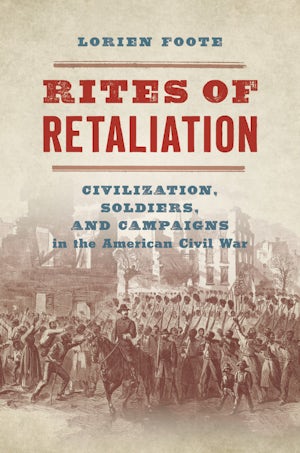 During the Civil War, Union and Confederate politicians, military commanders, everyday soldiers, and civilians claimed their approach to the conflict was civilized, in keeping with centuries of military tradition meant to restrain violence and preserve national honor. One hallmark of civilized warfare was a highly ritualized approach to retaliation. This ritual provided a forum to accuse the enemy of excessive behavior, to negotiate redress according to the laws of war, and to appeal to the judgment of other civilized nations. As the war progressed, Northerners and Southerners feared they were losing their essential identity as civilized, and the attention to retaliation grew more intense. When Black soldiers joined the Union army in campaigns in South Carolina, Georgia, and Florida, raiding plantations and liberating enslaved people, Confederates argued the war had become a servile insurrection. And when Confederates massacred Black troops after battle, killed white Union foragers after capture, and used prisoners of war as human shields, Federals thought their enemy raised the black flag and embraced savagery.

Blending military and cultural history, Lorien Foote’s rich and insightful book sheds light on how Americans fought over what it meant to be civilized and who should be extended the protections of a civilized world.

Lorien Foote is Patricia & Bookman Peters Professor of History at Texas A&M University, and author of The Yankee Plague: Escaped Union Prisoners and the Collapse of the Confederacy.


For more information about Lorien Foote, visit the Author Page.

“This book provides a detailed explication of the rite of retaliation and its use in the extremely complex context of the American Civil War.” – The Journal of America’s Military Past

“In meshing ideas about Union, civilization, the morality of warfare, and military decision-making, Foote’s important book is the first of its kind, shedding new light on debates about the nature and conduct of the American Civil War.”--Andrew S. Bledsoe, Lee University