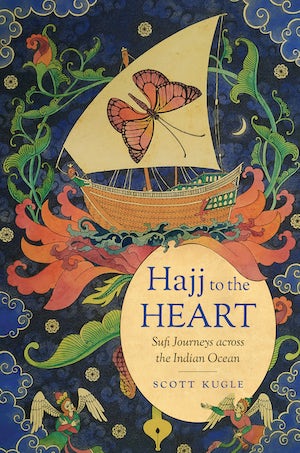 Against the sweeping backdrop of South Asian history, this is a story of journeys taken by sixteenth-century reformist Muslim scholars and Sufi mystics from India to Arabia. At the center is the influential Sufi scholar Shaykh ʿAli Muttaqi and his little-known network of disciples. Scott Kugle relates how ʿAli Muttaqi, an expert in Arabic, scriptural hermeneutics, and hadith, left his native South Asia and traversed treacherous seas to make the Hajj to Mecca. Settling in Mecca, he continued to influence his homeland from overseas. Kugle draws on his original translations of Arabic and Persian manuscripts, never before available in English, to trace ʿAli Muttaqi’s devotional writings, revealing how the Hajj transformed his spiritual life and political loyalties.

The story expands across three generations of peripatetic Sufi masters in the Mutaqqi lineage as they travel for purposes of pilgrimage, scholarship, and sometimes simply for survival along Indian Ocean maritime routes linking global Muslim communities. Exploring the political intrigue, scholarly debates, and diverse social milieus that shaped the colorful personalities of his Sufi subjects, Kugle argues for the importance of Indian Sufi thought in the study of hadith and of ethics in Islam.

The open-access enhanced edition of Hajj to the Heart can be found here: https://manifold.ecds.emory.edu/projects/hajj-to-the-heart

Scott Kugle is professor of South Asian and Islamic studies at Emory University. His most recent book is When Sun Meets Moon: Gender, Eros, and Ecstasy in Urdu Poetry.
For more information about Scott Kugle, visit the Author Page.

“An informative, innovative, multilayered, and immensely entertaining book. The combination of Scott Kugle’s singular talents as a researcher and writer bring this incredibly complex and immersive history to vibrant life.  I am simply in awe at what Kugle has managed to pull off here—and I expect an equally enthusiastic reception among a broad readership for this groundbreaking work of scholarship.”—Robert Rozehnal, Lehigh University

“A significant contribution to our understanding of the Islamic reform traditions in South Asia and beyond. Translating primary texts into polished poetic prose, Scott Kugle provides a compelling argument that will engage a wide audience of interdisciplinary readers.”— Ahmad S. Dallal, Georgetown University in Qatar