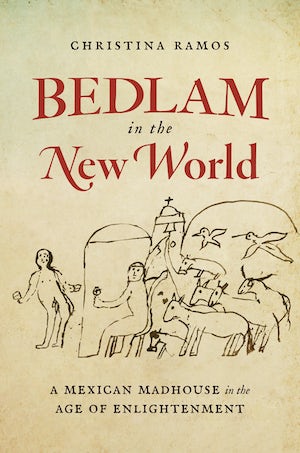 A rebellious Indian proclaiming noble ancestry and entitlement, a military lieutenant foreshadowing the coming of revolution, a blasphemous Creole embroiderer in possession of a bundle of sketches brimming with pornography. All shared one thing in common. During the late eighteenth century, they were deemed to be mad and forcefully admitted to the Hospital de San Hipólito in Mexico City, the first hospital of the New World to specialize in the care and custody of the mentally disturbed.

Christina Ramos reconstructs the history of this overlooked colonial hospital from its origins in 1567 to its transformation in the eighteenth century, when it began to admit a growing number of patients transferred from the Inquisition and secular criminal courts. Drawing on the poignant voices of patients, doctors, friars, and inquisitors, Ramos treats San Hipólito as both a microcosm and a colonial laboratory of the Hispanic Enlightenment—a site where traditional Catholicism and rationalist models of madness mingled in surprising ways. She shows how the emerging ideals of order, utility, rationalism, and the public good came to reshape the institutional and medical management of madness. While the history of psychiatry’s beginnings has often been told as seated in Europe, Ramos proposes an alternative history of madness’s medicalization that centers colonial Mexico and places religious figures, including inquisitors, at the pioneering forefront.

Christina Ramos is assistant professor of history at Washington University in St. Louis.


For more information about Christina Ramos, visit the Author Page.

“Introducing San Hipólito as a site that might have been at the forefront of processes of medicalization of insanity both in Europe and the New World, this fascinating study presents an alternative to Eurocentric narratives of Enlightenment and mental disease.”—Jorge Cañizares-Esguerra, The University of Texas at Austin

“This superb book provides a beautifully written and impressively researched study of life inside New Spain’s San Hipólito Hospital for the mad. Reconstructing the hospital’s connections to colonial society, Christina Ramos illuminates how inquisitors and secular authorities, physicians and patients, and a host of other historical actors turned San Hipólito into a site of knowledge production. A landmark study in the histories of medicine, colonialism, psychiatry, and the Enlightenment in the Spanish Empire.”— Adam Warren, University of Washington