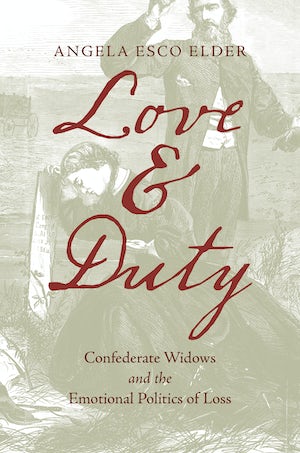 Between 1861 and 1865, approximately 200,000 women were widowed by the deaths of Civil War soldiers. They recorded their experiences in diaries, letters, scrapbooks, and pension applications. In Love and Duty, Angela Esco Elder draws on these materials—as well as songs, literary works, and material objects like mourning gowns—to explore white Confederate widows’ stories, examining the records of their courtships, marriages, loves, and losses to understand their complicated relationship with the Confederate state. Elder shows how, in losing their husbands, many women acquired significant cultural capital, which positioned them as unlikely actors to gain political influence.

Confederate officialdom championed a particular image of white widowhood—the young wife who selflessly transferred her monogamous love from her dead husband to the deathless cause for which he’d fought. But a closer look reveals that these women spent their new cultural capital with great shrewdness and variety. Not only were they aware of the social status gained in widowhood; they also used that status on their own terms, turning mourning into a highly politicized act amid the battle to establish the Confederacy’s legitimacy. Death forced all Confederate widows to reconstruct their lives, but only some would choose to play a role in reconstructing the nation.

"Disputes over the meaning of conflicts continue long after the shooting stops. The Civil War ended some 157 years ago, but Americans still argue about how to remember it. Was Lee, for example, a noble Virginian or a heartless whipper of captive humans — and should his statue stand in our cities? [Love and Duty] grapple[s] with such questions by examining the rich subject of American funerals in the 19th century."—Thomas E. Ricks, New York Times Book Review

"Angela Elder's important book adds to the growing history of emotions during the Civil War . . .Love and Duty is a very readable book, deplete of jargon, and filled with fascinating stories of Confederate widows."—Civil War Book Review

“Elder has written a smart cultural history that sympathetically recovers the lives of widows and systematically documents the Civil War’s destruction and its aftermath. The book is both a delight to read and a significant contribution.”—James J. Broomall, Shepherd University

“Angela Esco Elder’s fascinating book complicates the ideal of the dutifully loyal Confederate war widow, challenging broader generalizations about women and the Civil War. Probing individual women’s suffering and loss, Elder reveals the deep emotional costs of war and the ways in which these widows’ behavior often failed to fit societal expectations. Well written and deeply researched, Love and Duty offers readers a thoughtful exploration of the white southern household in the crucible of war and defeat.”—Lesley J. Gordon, University of Alabama