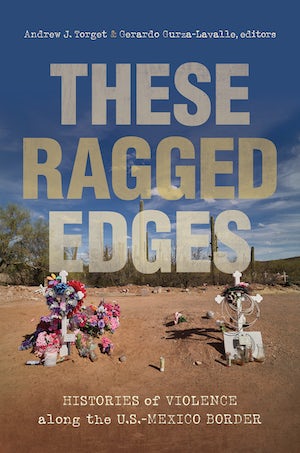 The U.S.-Mexico border has earned an enduring reputation as a site of violence. During the past twenty years in particular, the drug wars—fueled by the international movement of narcotics and vast sums of money—have burned an abiding image of the border as a place of endemic danger into the consciousness of both countries. By the media, popular culture, and politicians, mayhem and brutality are often portrayed as the unavoidable birthright of this transnational space. Through multiple perspectives from both sides of the border, the collected essays in These Ragged Edges directly challenge that idea, arguing that rapidly changing conditions along the U.S.-Mexico border through the nineteenth, twentieth, and twenty-first centuries have powerfully shaped the ebb and flow of conflict within the region.  By diving deeply into diverse types of violence, contributors dissect the roots and consequences of border violence across numerous eras, offering a transnational analysis of how and why violence has affected the lives of so many inhabitants on both sides of the border.

Andrew J. Torget is author of Seeds of Empire: Cotton, Slavery, and the Transformation of the Texas Borderlands, 1800-1850.
For more information about Andrew J. Torget, visit the Author Page.

Gerardo Gurza-Lavalle is professor of history at the Instituto Mora in Mexico City.


For more information about Gerardo Gurza-Lavalle, visit the Author Page.

“The solid, clearly written, well-researched articles that comprise this edited volume attest to the productivity of a transnational perspective and highlight the importance of context in structuring state intervention when determining the stakes involved. These Ragged Edges draws the lines of confrontation, negotiation, and cooperation over the class, ethnic, and national divisions which constitute border violence as a complex historical phenomenon.”—Erika Pani, El Colegio de México

"This fabulous volume challenges the problematic assumption that the U.S.-Mexico borderlands have always been characterized by violence. Each essay instead details the sporadic and episodic nature of border violence. This is an important subject, each essay is compelling and well argued, and together they make for a fine book."—Brian Behnken, author of Fighting Their Own Battles: Mexican Americans, African Americans, and the Struggle for Civil Rights in Texas