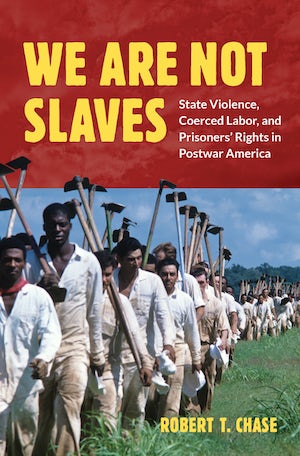 In the early twentieth century, the brutality of southern prisons became a national scandal. Prisoners toiled in grueling, violent conditions while housed in crude dormitories on what were effectively slave plantations. This system persisted until the 1940s when, led by Texas, southern states adopted northern prison design reforms. Texas presented the reforms to the public as modern, efficient, and disciplined. Inside prisons, however, the transition to penitentiary cells only made the endemic violence more secretive, intensifying the labor division that privileged some prisoners with the power to accelerate state-orchestrated brutality and the internal sex trade. Reformers' efforts had only made things worse--now it was up to the prisoners to fight for change.

Drawing from three decades of legal documents compiled by prisoners, Robert T. Chase narrates the struggle to change prison from within. Prisoners forged an alliance with the NAACP to contest the constitutionality of Texas prisons. Behind bars, a prisoner coalition of Chicano Movement and Black Power organizations publicized their deplorable conditions as “slaves of the state” and initiated a prison-made civil rights revolution and labor protest movement. These insurgents won epochal legal victories that declared conditions in many southern prisons to be cruel and unusual--but their movement was overwhelmed by the increasing militarization of the prison system and empowerment of white supremacist gangs that, together, declared war on prison organizers. Told from the vantage point of the prisoners themselves, this book weaves together untold but devastatingly important truths from the histories of labor, civil rights, and politics in the United States as it narrates the transition from prison plantations of the past to the mass incarceration of today.

“Drawing from three decades of legal documents compiled by prisoners, Chase narrates the struggle to change prisons from within. . . . He finds that these insurgents won epochal legal victories but that their movement was overwhelmed by the increasing militarization of the prison system and empowerment of white supremacist gangs that, together, declared war on prison organizers.”--Law & Social Inquiry

“An outstanding work that will provoke discussion and undoubtedly inspire other studies as this country seeks solutions to problems that stem from the nation’s experience with incarceration.”--Southwestern Historical Quarterly

"Chase's brilliant inquiry focuses on the Texas Department of Corrections (TDC) but references correctional practices in other southern states."--CHOICE

"A rare look at prison conditions and organized activism as told by those held in custody."--Criminal Law and Criminal Justice Books

"Successfully marries historical analysis to carceral studies. Chase extends the timeline of incarceration in the United States, picking up from convict leasing to draw broader connections over the longue durée of caged and carceral labor. . . . A welcome contribution to the shift in the discourse of prisoners’ rights toward activism and the agency of incarcerated folks."--H-Nationalism

"A complex story, expertly told from a prodigious body of sources. . . . Chase’s We Are Not Slaves tells a multifaceted story of the often untold, or at the very least unacknowledged, resilience of bondage in the post-slavery and even post-civil rights eras. At the same time, We Are Not Slaves is also a story of the boundless capacity and resilience of humans—even the supposedly undeserved. The TDC prisoners’ rights movement is a template for all of seeking “freedom.” Using political protest, labor strikes, testimonies, and legal writing, they bear witness to their own humanity."--Shannon King, Black Perspectives