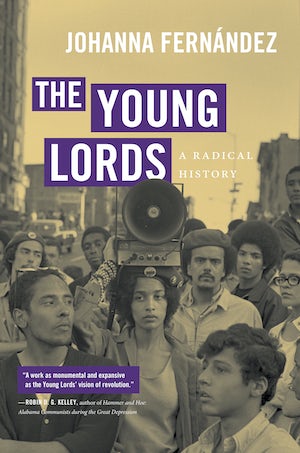 Against the backdrop of America’s escalating urban rebellions in the 1960s, an unexpected cohort of New York radicals unleashed a series of urban guerrilla actions against the city’s racist policies and contempt for the poor. Their dramatic flair, uncompromising socialist vision for a new society, skillful ability to link local problems to international crises, and uncompromising vision for a new society riveted the media, alarmed New York’s political class, and challenged nationwide perceptions of civil rights and black power protest. The group called itself the Young Lords.

Utilizing oral histories, archival records, and an enormous cache of police surveillance files released only after a decade-long Freedom of Information Law request and subsequent court battle, Johanna Fernández has written the definitive account of the Young Lords, from their roots as a Chicago street gang to their rise and fall as a political organization in New York. Led by poor and working-class Puerto Rican youth, and consciously fashioned after the Black Panther Party, the Young Lords occupied a hospital, blocked traffic with uncollected garbage, took over a church, tested children for lead poisoning, defended prisoners, fought the military police, and fed breakfast to poor children. Their imaginative, irreverent protests and media conscious tactics won reforms, popularized socialism in the United States and exposed U.S. mainland audiences to the country’s quiet imperial project in Puerto Rico. Fernández challenges what we think we know about the sixties. She shows that movement organizers were concerned with finding solutions to problems as pedestrian as garbage collection and the removal of lead paint from tenement walls; gentrification; lack of access to medical care; childcare for working mothers; and the warehousing of people who could not be employed in deindustrialized cities. The Young Lords’ politics and preoccupations, especially those concerning the rise of permanent unemployment foretold the end of the American Dream. In riveting style, Fernández demonstrates how the Young Lords redefined the character of protest, the color of politics, and the cadence of popular urban culture in the age of great dreams.

“The Young Lords Party lasted essentially two years (1969–70) with an active membership of less than 3,000, yet as this book shows, its brief but spectacular history is worth studying and particularly poignant in the time of Black Lives Matter.”--CHOICE

“The definitive work on this political organization and tells the fascinating story with rich detail and narrative drama.”--Criminal Law & Criminal Justice Books

"ANot only scholars and students but also activists would benefit from reading this book, for, aside from the fascinating history itself, one can glean lessons on how to organize from the failures and successes of the Young Lords."--H-Socialisms