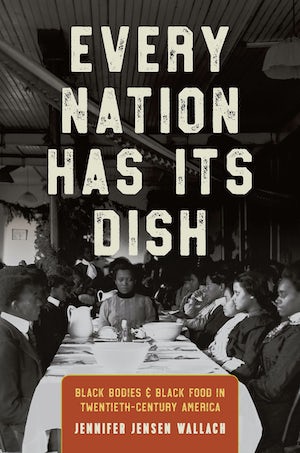 Jennifer Jensen Wallach's nuanced history of black foodways across the twentieth century challenges traditional narratives of "soul food" as a singular style of historical African American cuisine. Wallach investigates the experiences and diverse convictions of several generations of African American activists, ranging from Booker T. Washington and W. E. B. Du Bois to Mary Church Terrell, Elijah Muhammad, and Dick Gregory. While differing widely in their approaches to diet and eating, they uniformly made the cultivation of "proper" food habits a significant dimension of their work and their conceptions of racial and national belonging. Tracing their quests for literal sustenance brings together the race, food, and intellectual histories of America.

Directly linking black political activism to both material and philosophical practices around food, Wallach frames black identity as a bodily practice, something that conscientious eaters not only thought about but also did through rituals and performances of food preparation, consumption, and digestion. The process of choosing what and how to eat, Wallach argues, played a crucial role in the project of finding one's place as an individual, as an African American, and as a citizen.

Jennifer Jensen Wallach is professor and chair of the department of history at the University of North Texas. She is the author or editor of several books, including Dethroning the Deceitful Pork Chop.

“A deeply researched, highly analytical, sophisticated study of how African Americans thought about food in the twentieth century. She deploys manuscript collections, a wide array of magazines and newspapers, published primary sources, including cookbooks, and fiction by African American authors to construct her thoughtful argument.”--Southwestern Historical Quarterly

“In this brilliantly researched and engaging study, Jennifer Jensen Wallach demonstrates that the most basic human need—feeding one’s body—had extraordinary personal and political valences for African Americans in the long 20th century.”--Journal of Social History

“A valuable and welcome addition [to] the growing historiography of Black foodways in the United States.”--Western Historical Quarterly

“Explores the role of food in the history of efforts by African Americans to achieve political and social equality from the late nineteenth century through the civil rights era of the 1960s and 1970s. . . . Wallach draws on the rapidly expanding body of scholarship on African American culinary history and contributes new research of her own. . . . [to shed] new light on black culinary activism that predates the emergence of the concept of soul food in the 1960s.”--Journal of Southern History

“Throughout this very well-researched work, Wallach displays her profound knowledge of African American history and foodways, presenting the experiences of generations of African American activists and reformers. . . . A compelling work that examines and decodes food practices, habits, and choices to reveal the ways in which individuals and groups construct and reform social, political, and cultural identities.”--Digest: A Journal of Foodways & Culture

“In her emphasis on the embodied experience of the politically conscious eater, Wallach has made a valuable contribution to the field of food studies and lends quotidian insight to analyses of black intellectual discourse in twentieth-century America. . . . A compelling read, especially for those interested in how food may be used to make political, social, and cultural statements of identity and belonging.”--North Carolina Historical Review