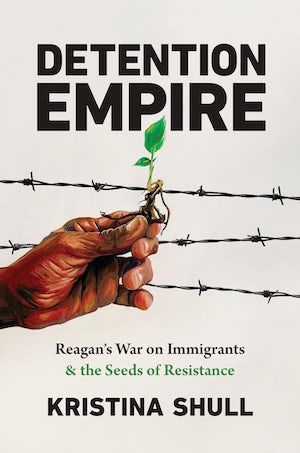 The early 1980s marked a critical turning point for the rise of modern mass incarceration in the United States. The Mariel Cuban migration of 1980, alongside increasing arrivals of Haitian and Central American asylum-seekers, galvanized new modes of covert warfare in the Reagan administration's globalized War on Drugs. Using newly available government documents, Shull demonstrates how migrant detention operates as a form of counterinsurgency at the intersections of US war-making and domestic carceral trends. As the Reagan administration developed retaliatory enforcement measures to target a racialized specter of mass migration, it laid the foundations of new forms of carceral and imperial expansion.

Reagan's war on immigrants also sowed seeds of mass resistance. Drawing on critical refugee studies, community archives, protest artifacts, and oral histories, Detention Empire also shows how migrants resisted state repression at every turn. People in detention and allies on the outside—including legal advocates, Jesse Jackson's Rainbow Coalition, and the Central American peace and Sanctuary movements—organized hunger strikes, caravans, and prison uprisings to counter the silencing effects of incarceration and speak truth to US empire. As the United States remains committed to shoring up its borders in an era of unprecedented migration and climate crisis, reckoning with these histories takes on new urgency.

Kristina Shull is assistant professor of history at the University of North Carolina at Charlotte.
For more information about Kristina Shull, visit the Author Page.

“In this deeply-researched and eye-opening book, Kristina Shull traces the history of one of the least understood dimensions of mass incarceration: the immigration detention regime that emerged alongside the War on Drugs in the 1980s. She illuminates how the systematic imprisonment of migrants—particularly from Central America and the Caribbean—functioned as a mechanism of US empire and a method of warfare while drawing attention to the way the tens of thousands of people detained during this period fought back against state-sanctioned violence through peaceful protests, hunger strikes, and direct action. As we continue to confront the atrocity of border enforcement in our own time, Shull’s groundbreaking work is an indispensable contribution.”—Elizabeth Hinton, author of America on Fire: The Untold History of Police Violence and Black Rebellion Since the 1960s

"A unique and timely bridge between the literature on 'crimmigration' and refugee studies. Assessing the centrality of asylee deterrence to the establishment of the United States' modern migration detention system, Shull solidifies the connections between asylum politics, US war-making, and empire."—Jenna M. Loyd, coauthor of Boats, Borders, and Bases: Race, the Cold War, and the Rise of Migration Detention in the United States

“Kristina Shull’s book is a revelation for anyone interested in the history and lessons of the immigrant rights movement in the United States. It brings to life powerful examples of resistance to Reagan-era immigration detention and deportation policies, with perspectives that center immigrant experiences and resonate with resistance movements today.”—Alina Das, author of No Justice in the Shadows: How America Criminalizes Immigrants