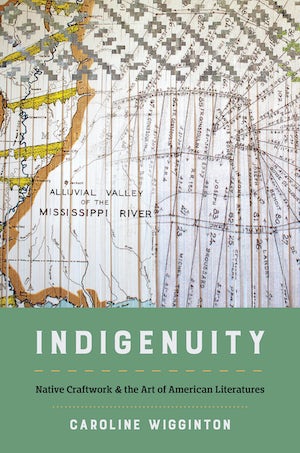 For hundreds of years, American artisanship and American authorship were entangled practices rather than distinct disciplines. Books, like other objects, were multisensory items all North American communities and cultures, including Native and settler colonial ones, regularly made and used. All cultures and communities narrated and documented their histories and imaginations through a variety of media. All created objects for domestic, sacred, curative, and collective purposes.

In this innovative work at the intersection of Indigenous studies, literary studies, book history, and material culture studies, Caroline Wigginton tells a story of the interweavings of Native craftwork and American literatures from their ancient roots to the present. Focused primarily on North America, especially the colonized lands and waters now claimed by the United States, this book argues for the foundational but often-hidden aesthetic orientation of American literary history toward Native craftwork. Wigginton knits this narrative to another of Indigenous aesthetic repatriation through the making and using of books and works of material expression. Ultimately, she reveals that Native craftwork is by turns the warp and weft of American literature, interwoven throughout its long history.

"This visually striking book forges many surprising and fruitful connections between Native craft practices and European-American material texts; it will rapidly become a go-to source for teachers and scholars alike."—Phillip H. Round, University of Iowa