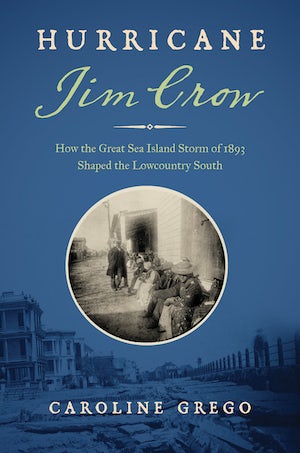 On an August night in 1893, the deadliest hurricane in South Carolina history struck the Lowcountry, killing thousands—almost all African American. But the devastating storm is only the beginning of this story. The hurricane's long effects intermingled with ongoing processes of economic downturn, racial oppression, resistance, and environmental change. In the Lowcountry, the political, economic, and social conditions of Jim Crow were inextricable from its environmental dimensions.

This narrative history of a monumental disaster and its aftermath uncovers how Black workers and politicians, white landowners and former enslavers, northern interlocutors and humanitarians all met on the flooded ground of the coast and fought to realize very different visions for the region's future. Through a telescoping series of narratives in which no one's actions were ever fully triumphant or utterly futile, Hurricane Jim Crow explores with nuance this painful and contradictory history and shows how environmental change, political repression, and communal traditions of resistance, survival, and care converged.

Caroline Grego is visiting assistant professor of history at Queens University of Charlotte.


For more information about Caroline Grego, visit the Author Page.

"Grego stretches a wide net and captures the totality of the hurricane's aftermath in the context of sea island landscape and culture, tenure arrangements, resistance to white dominance, and the erosion of gains from the Reconstruction Era. Well written and admirably argued, Hurricane Jim Crow transcends other books that touch on the subject and resonates with a wide band of scholarship."—Pete Daniel, author of Dispossession: Discrimination against African American Farmers in the Age of Civil Rights

"Grego tells a complicated story of how sudden environmental devastation empowered white supremacists to consolidate power despite the efforts of the Red Cross and the local African American community. Hurricane Jim Crow recounts the history of this disaster not by presupposing the coming of Jim Crow as an inevitability but by emphasizing contingency and negotiation between white oppression and Black resistance."

—Cynthia A. Kierner, author of Inventing Disaster: The Culture of Calamity from the Jamestown Colony to the Johnstown Flood

"Hurricane Jim Crow is an incisive and compelling chronicle of the aftermath of a devastating storm that collided with social, economic, and political realities, exacerbating and unearthing African Americans' struggle for survival and their freedom fight. Caroline Grego unveils the troubled past of a region famous for its picturesque landscapes on which sanitized versions of history are often painted."—Melissa L. Cooper, author of Making Gullah: A History of Sapelo Islanders, Race, and the American Imagination