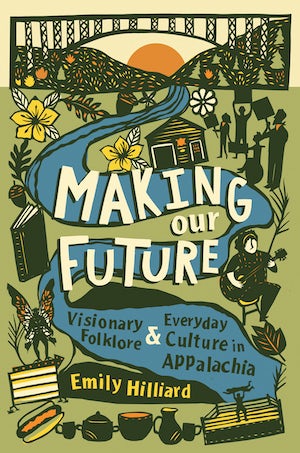 Drawing from her work as state folklorist, Emily Hilliard explores contemporary folklife in West Virginia and challenges the common perception of both folklore and Appalachian culture as static, antiquated forms, offering instead the concept of "visionary folklore" as a future-focused, materialist, and collaborative approach to cultural work.

With chapters on the expressive culture of the West Virginia teachers' strike, the cultural significance of the West Virginia hot dog, the tradition of independent pro wrestling in Appalachia, the practice of nonprofessional women songwriters, the collective counternarrative of a multiracial coal camp community, the invisible landscape of writer Breece D'J Pancake's hometown, the foodways of an Appalachian Swiss community, the postapocalyptic vision presented in the video game Fallout 76, and more, the book centers the collective nature of folklife and examines the role of the public folklorist in collaborative engagements with communities and culture. Hilliard argues that folklore is a unifying concept that puts diverse cultural forms in conversation, as well as a framework that helps us reckon with the past, understand the present, and collectively shape the future.

"A benchmark in public folklore. Hilliard's ability to weave together many voices has given us a work that expands the horizons of critical heritage work to encompass hot dog condiments, wrestling matches, and teachers' strikes, calling attention to community life itself as the object of cultural stewardship."

"West Virginia has long deserved a book like Hilliard’s delightfully written guide, which showcases the breadth and diversity of its cultural practices and centers the imaginations of those who produced them. With deep commitment to both place and field, Making Our Future is sure to be a lasting model of public scholarship at its most inventive." —Elizabeth Catte, author of What You Are Getting Wrong about Appalachia

"Innovative and inspiring, Making Our Future is a significant contribution to Appalachian studies. Hilliard combines first-rate research with great storytelling to show us how West Virginia cultural practices we often take for granted are already incubating strategies for more socially just futures." —Ann Pancake, author of Strange As This Weather Has Been