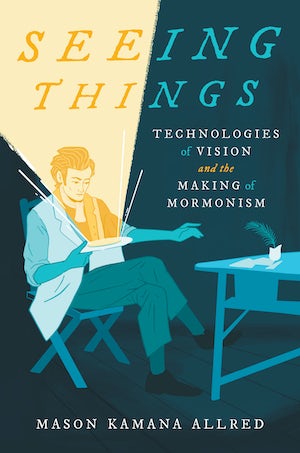 To purchase online via an independent bookstore, visit Bookshop.org
In this theoretically rich work, Mason Kamana Allred unearths the ways Mormons have employed a wide range of technologies to translate events, beliefs, anxieties, and hopes into reproducible experiences that contribute to the growth of their religious systems of meaning. Drawing on methods from cultural history, media studies, and religious studies, Allred focuses specifically on technologies of vision that have shaped Mormonism as a culture of seeing. These technologies, he argues, were as essential to the making of Mormonism as the humans who received, interpreted, and practiced their faith.

While Mormons’ uses of television and the internet are recent examples of the tradition’s use of visual technology, Allred excavates older practices and technologies for negotiating the spirit, such as panorama displays and magic lantern shows. Fusing media theory with feminist new materialism, he employs media archaeology to examine Mormons’ ways of performing distinctions, beholding as a way to engender radical visions, and standardizing vision to effect assimilation. Allred’s analysis reveals Mormonism as always materially mediated and argues that religious history is likewise inherently entangled with media.

"American Mormonism is a religion of seers. What does it mean to see things? Mason Kamana Allred answers: it means to speculate by media, and the media of Mormonism help its practitioners to see at distances, over space and far back into time, beyond death into the everyday here and now. Seeing Things, with its lively pen and gift for bringing forth hidden treasures from the archives, serves both as the pioneering Mormon media history and as spectacles for seeing beyond."—John Durham Peters, Yale University

"Written with a sensitive eye to religious history, national politics, and the surprising liveliness of things and the dead, Allred offers a fascinating account of links between spirit and machine in Mormon history. The book deftly interweaves scholarship on lived religion, media theory, and new materialism. It will reward readers in media studies and religious studies, inviting them to reconsider the mysteries of technology and the technicity of vision, spiritual and otherwise."—Jenna Supp-Montgomerie, University of Iowa