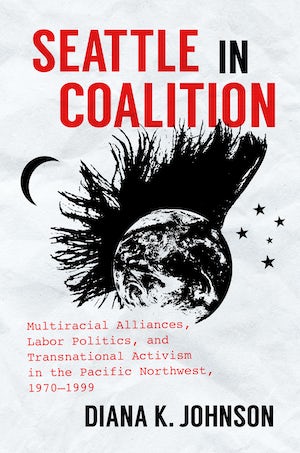 To purchase online via an independent bookstore, visit Bookshop.org
In the fall of 1999, the World Trade Organization (WTO) prepared to hold its biennial Ministerial Conference in Seattle. The event culminated in five days of chaotic political protest that would later be known as the Battle in Seattle. The convergence represented the pinnacle of decades of organizing among workers of color in the Pacific Northwest, yet the images and memory of what happened centered around assertive black bloc protest tactics deployed by a largely white core of activists whose message and goals were painted by media coverage as disorganized and incoherent.

This insightful history takes readers beyond the Battle in Seattle and offers a wider view of the organizing campaigns that marked the last half of the twentieth century. Narrating the rise of multiracial coalition building in the Pacific Northwest from the 1970s to the 1990s, Diana K. Johnson shows how activists from Seattle's Black, Indigenous, Chicano, and Asian American communities traversed racial, regional, and national boundaries to counter racism, economic inequality, and perceptions of invisibility. In a city where more than eighty-five percent of the residents were white, they linked far-flung and historically segregated neighborhoods while also crafting urban-rural, multiregional, and transnational links to other populations of color. The activists at the center of this book challenged economic and racial inequality, the globalization of capitalism, and the white dominance of Seattle itself long before the WTO protest.

"In this timely and important study, Johnson excavates Seattle's 'long 1960s' history of multiethnic and multiracial activism through an exploration of overlapping movements that included Native American, African American, Chicanx, and Asian American 'Third World' solidarity activism in the face of urban decline and white-majority neglect. This engaging and deeply researched study of Seattle, one of the USA's most important cities, is long overdue."—Marc Rodriguez, Portland State University

"Seattle in Coalition is a pathbreaking study of multiethnic coalitions struggling for civil rights and social justice in the American West. It is a prototype for future such studies and an inspiration for today's struggle to preserve American democracy."—Mario T. García, University of California, Santa Barbara

"Diana Johnson's book offers a lens into multicultural participation in anti-globalization movements, resulting in a convincing case for the long history of activism in Seattle. The assertion that multiracial communities were interested in issues beyond their districts has long been overlooked in histories of postwar cities and segregation—Seattle in Coalition helps amend that gap."—Josh A. Sides, California State University Northridge

"Seattle in Coalition reinterprets the 1970s as an era of thriving multiracial coalition, challenging the more traditional, declensionist interpretation of the decade. Connecting Seattle's local, regional, and transnational issues and activism, and building upon the city's earlier ethnic and racial history, Diana Johnson demonstrates how activism rooted in the 1970s shaped efforts for decades to come."—Shana Bernstein, Northwestern University