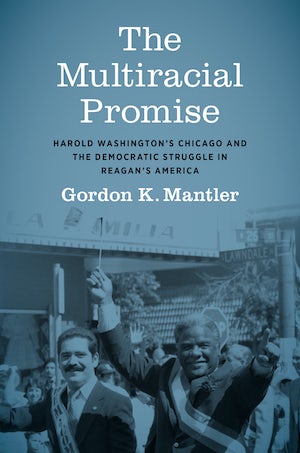 In April 1983, a dynamic, multiracial political coalition did the unthinkable, electing Harold Washington as the first Black mayor of Chicago. Washington's victory was unlikely not just because America's second city was one of the nation's most racially balkanized but also because it came at a time when Ronald Reagan and other political conservatives seemed resurgent. Washington's initial win and reelection in 1987 established the charismatic politician as a folk hero. It also bolstered hope among Democrats that the party could win elections by pulling together multiracial urban voters around progressive causes. Yet what could be called the Washington era revealed clear limits to electoral politics and racial coalition building when decoupled from neighborhood-based movement organizing.

Drawing on a rich array of archives and oral history interviews, Gordon K. Mantler offers a bold reexamination of the Harold Washington movement and moment. Taking readers into Chicago's street-level politics and the often tense relationships among communities and their organizers, Mantler shows how white supremacy, deindustrialization, dysfunction, and voters' own contradictory expectations stubbornly impeded many of Washington's proposed reforms. Ultimately, Washington's historic victory and the thwarted ambitions of his administration provide a cautionary tale about the peril of placing too much weight on electoral politics above other forms of civic action—a lesson today's activists would do well to heed.

Gordon K. Mantler is associate professor of writing and history and executive director of the University Writing Program at George Washington University. He is author of Power to the Poor: Black-Brown Coalition and the Fight for Economic Justice, 1960–1974.
For more information about Gordon K. Mantler, visit the Author Page.

"This is the book we've needed on Harold Washington and his era of Chicago politics. Mantler takes readers beyond the man and his moment, exploring the nuances of political coalitions, the relationships between grassroots and electoral politics, and the historical and modern challenges of making a more equal Chicago."—Simon Balto, author of Occupied Territory: Policing Black Chicago from Red Summer to Black Power

"The Multiracial Promise takes its place on a short shelf of indispensable books on urban politics in the late twentieth century. Gordon Mantler moves beyond the politics of personality to offer a richly told account of the relationship of electoral politics to social movements, breaking from both romantic views of coalition building across racial lines and cynical accounts of social movement cooptation. Scholars, activists, and politicians can all learn a lot from this critical reflection on the opportunities and limitations of electoral politics in American cities then and now."—Thomas J. Sugrue, author of Not Even Past: Barack Obama and the Burden of Race

"Exploring the gritty details of Chicago politics, Gordon Mantler shows us that the successful election of the city’s first African American mayor, the late Harold Washington, was achieved not through the mobilization of black voters alone but with the participation and support of Latinos, progressive whites, and the LGBTQ community. In an era crippled by the Daley (Democratic) machine, industrial decline, growing unemployment, and Reagan austerity policies, the interracial coalition Washington cultivated provided the only real hope for challenging economic inequality and expanding democracy. Mantler masterfully outlines the promise and limits of such alliances and reminds us both why they are so critical to a democratic society and meaningful social change but also how they can be used against the masses, to serve only an elite few. "—Lilia Fernandez, Professor at University of Illinois at Chicago, author of Brown in the Windy City: Mexicans and Puerto Ricans in Postwar Chicago

“Mantler’s provocative, perceptive book highlights the battles over racism, city council infighting, and struggles to meet community activists’ expectations that marked Harold Washington’s years as Chicago mayor. It also offers rich insights into Latinx Chicagoans' political participation, the gender dynamics in Chicago electoral politics, and the political careers of several major players of the Illinois Black Panther Party’s original Rainbow Coalition.  A must read for scholars and activists alike.”—Jakobi Williams, author of From the Bullet to the Ballot: The Illinois Chapter of the Black Panther Party and Racial Coalition Politics in Chicago