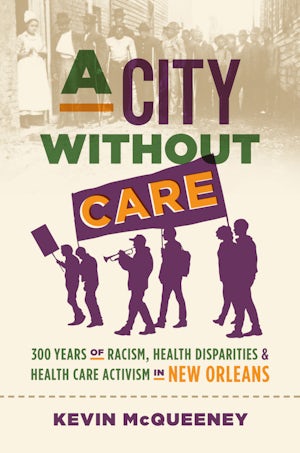 To purchase online via an independent bookstore, visit Bookshop.org
New Orleans is a city that is rich in culture, music, and history. It has also long been a site of some of the most intense racially based medical inequities in the United States. Kevin McQueeney traces that inequity from the city's founding in the early eighteenth century through three centuries to the present. He argues that racist health disparities emerged as a key component of the city's slave-based economy and quickly became institutionalized with the end of Reconstruction and the rise of Jim Crow. McQueeney also shows that, despite legislation and court victories in the civil rights era, a segregated health care system still exists today.

In addition to charting this history of neglect, McQueeney also suggests pathways to fix the deeply entrenched inequities, taking inspiration from the "long civil rights" framework and reconstructing the fight for improved health and access to care that started long before the boycotts, sit-ins, and marches of the 1950s and 1960s. In telling the history of how New Orleans has treated its Black citizens in its hospitals, McQueeney uncovers the broader story of how urban centers across the country have ignored Black Americans and their health needs for the entire history of the nation.

"McQueeney deftly analyzes the way medical and state officials stitched medical segregation back together, often in the face of direct and organized Black protest. An important and timely history."—John McKiernan-Gonzalez, Texas State University

"This engrossing archival work sheds light on the all-too-common problem of public officials reinventing medical systems to shut out African Americans and other vulnerable people. Using health care in New Orleans as a template, McQueeney demonstrates that health care is a key site for the making and remaking of racial segregation and urban geography."—Urmi Engineer Willoughby, Pitzer College