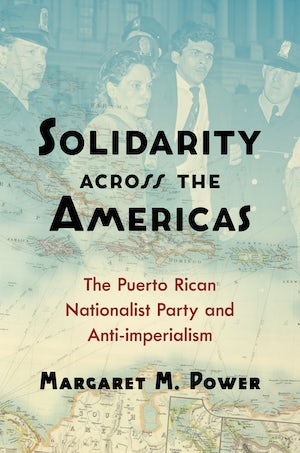 To purchase online via an independent bookstore, visit Bookshop.org
The Puerto Rican Nationalist Party (PNPR) understood that to successfully establish an independent nation it needed to generate solidarity across the Americas with its struggle against US colonial rule. It invested significant energy, personnel, and resources in attending regional conferences, distributing its literature throughout the hemisphere, creating solidarity committees, presenting its case to elected officials and the general public, and promoting the causes of oppressed peoples. The hemispheric outpourings of solidarity with Puerto Rican independence have been obscured by larger, later liberation movements as well as the anticolonial party's ultimate failure to achieve independence. However, as this book shows, they were nonetheless central to anti-imperialists, nationalists, and revolutionaries from New York City to Buenos Aires.

Margaret M. Power's new history of the PNPR focuses on how it built a broad movement with active networks in virtually all of Latin America, much of the Caribbean, and New York City. This hemispheric view introduces a sprawling transnational network, nurtured by the PNPR from its founding in 1922 through its military actions of the 1950s and beyond that included individuals, parties, organizations, and governments throughout the Americas, and it resituates the Puerto Rican nationalist movement as a transnational revolutionary influence and force.

"This fascinating story often decenters the party's history from Pedro Albizu Campos and illuminates lesser-known and unknown characters while also decentering the history of the party from a strictly Puerto Rican setting. A fine read!"—Kirwin Shaffer, Penn State University–Berks College

"Breaks important new ground in the study of twentieth-century Puerto Rican politics. Powers's evidentiary base is strikingly broad, reaching from newspapers in multiple countries to oral history interviews to documents obtained via archives on no fewer than three continents."—Michael Staudenmaier, Manchester University