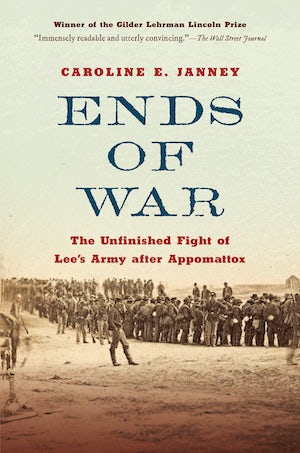 The Army of Northern Virginia's chaotic dispersal began even before Lee and Grant met at Appomattox Court House. As the Confederates had pushed west at a relentless pace for nearly a week, thousands of wounded and exhausted men fell out of the ranks. When word spread that Lee planned to surrender, most remaining troops stacked their arms and accepted paroles allowing them to return home, even as they lamented the loss of their country and cause. But others broke south and west, hoping to continue the fight. Fearing a guerrilla war, Grant extended the generous Appomattox terms to every rebel who would surrender himself. Provost marshals fanned out across Virginia and beyond, seeking nearly 18,000 of Lee's men who had yet to surrender. But the shock of Lincoln's assassination led Northern authorities to see threats of new rebellion in every rail depot and harbor where Confederates gathered for transport, even among those already paroled. While Federal troops struggled to keep order and sustain a fragile peace, their newly surrendered adversaries seethed with anger and confusion at the sight of Union troops occupying their towns and former slaves celebrating freedom.

In this dramatic new history of the weeks and months after Appomattox, Caroline E. Janney reveals that Lee's surrender was less an ending than the start of an interregnum marked by military and political uncertainty, legal and logistical confusion, and continued outbursts of violence. Janney takes readers from the deliberations of government and military authorities to the ground-level experiences of common soldiers. Ultimately, what unfolds is the messy birth narrative of the Lost Cause, laying the groundwork for the defiant resilience of rebellion in the years that followed.

“Immensely readable and utterly convincing . . . [Janney] offers a fresh and disquieting version of Lee’s surrender, adroitly balancing official, political and military decisions with the recollections of the men on the ground who endured — and sometimes defied — its consequences. Anyone who still believes that the scenes around Kabul airport this summer were uniquely chaotic must read Ends of War.” --The Wall Street Journal

"Janney expertly explains the complications of these ambiguous terms and their inconsistent application. The author also makes an excellent case that Grant should have specified terms more clearly, although she also acknowledges that he had to act quickly as circumstances on the ground shifted from day to day...this detailed military history will find an eager audience among Civil War enthusiasts."--Library Journal

“A detailed and compelling analysis. . . . Janney’s study is a welcome reminder that ending a war is a messy business, no more so than in the instance of the American Civil War.” --America's Civil War

“This beautifully written and engaging book will make an excellent addition to any graduate or undergraduate classroom. It is a valuable contribution to the military and political history of the Civil War.”--The Civil War Monitor

“If you’re tired of reading about familiar Civil War events and eager to learn something new, every chapter of Ends of War will satisfy.”--The Civil War Monitor's Best Civil War Books of 2021

"In the US, Janney is leading the charge in the study of the Civil War’s conclusion and here offers a detailed examination, with numerous participant accounts, of Confederate General Robert E. Lee’s surrender at Appomattox and the national confusion that followed for many months. Janney captures the legalities and military questions regarding how to implement parole, pardons, and amnesty; the difficulties of soldier repatriation or refusal to quit; the fear and distrust between North and South after Abraham Lincoln’s murder; and the key issues involving newly freed African Americans in a tableau illustrating the birth of many American issues that persist today...Recommended.”--CHOICE