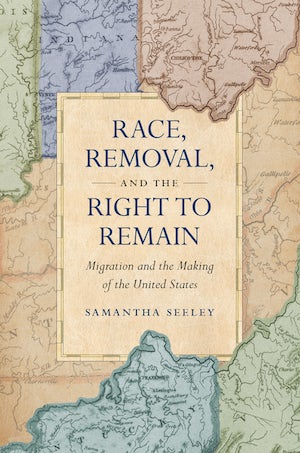 Who had the right to live within the newly united states of America?

In the country's founding decades, federal and state politicians debated which categories of people could remain and which should be subject to removal. The result was a white Republic, purposefully constructed through contentious legal, political, and diplomatic negotiation. But, as Samantha Seeley demonstrates, removal, like the right to remain, was a battle fought on multiple fronts. It encompassed tribal leaders' fierce determination to expel white settlers from Native lands and free African Americans' legal maneuvers both to remain within the states that sought to drive them out and to carve out new lives in the West. Never losing sight of the national implications of regional conflicts, Seeley brings us directly to the battlefield, to middle states poised between the edges of slavery and freedom where removal was both warmly embraced and hotly contested.

Samantha Seeley is assistant professor of history at the University of Richmond.
For more information about Samantha Seeley, visit the Author Page.

"Recommended. . . . This work demonstrates the central role removal occupied in the creation of the American Republic."—Choice

“This fine study shows that removal, as a set of foundational ideas and policies, has made a deep imprint on the United States in ways that we are only beginning to fully appreciate.”—H-Net

“Highlights important issues to consider as further research on Indian Removal is tied to historiographies on slavery and the rights of free people of color in antebellum America.”—North Carolina Historical Review

"Since the founding of the United States, lawmakers have funneled enormous energy into policing and confining the mobility of Native and Black people while casting free movement as white privilege. Against these fantasies, Indigenous people crafted powerful arguments to claim sovereignty and territory, while African Americans mobilized to remain in communities they called home. Seeley brings a much-needed perspective to these interconnected histories of race, rights, and migration."—Honor Sachs, University of Colorado

"Positing removal as a foundational concept in American life, Seeley radically expands its meaning and traces its impact beyond the discrete moment of the Trail of Tears and the Indian Removal Act. This is pathbreaking work, a significant intervention in early American historiography."—Michael Witgen, Columbia University

"By intertwining the migrations—forced, voluntary, and in between—of white, Black, and Native people in the early Republic, Samantha Seeley makes us see the long era of removal in an entirely new way. A revolutionary book and a model for telling all our histories together."—Kathleen DuVal, University of North Carolina, Chapel Hill