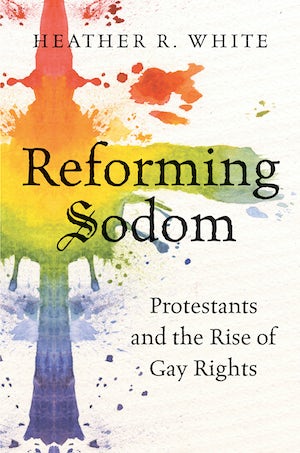 With a focus on mainline Protestants and gay rights activists in the twentieth century, Heather R. White challenges the usual picture of perennial adversaries with a new narrative about America's religious and sexual past. White argues that today's antigay Christian traditions originated in the 1920s when a group of liberal Protestants began to incorporate psychiatry and psychotherapy into Christian teaching. A new therapeutic orthodoxy, influenced by modern medicine, celebrated heterosexuality as God-given and advocated a compassionate "cure" for homosexuality.

White traces the unanticipated consequences as the therapeutic model, gaining popularity after World War II, spurred mainline church leaders to take a critical stance toward rampant antihomosexual discrimination. By the 1960s, a vanguard of clergy began to advocate for homosexual rights. White highlights the continued importance of this religious support to the consolidating gay and lesbian movement. However, the ultimate irony of the therapeutic orthodoxy's legacy was its adoption, beginning in the 1970s, by the Christian Right, which embraced it as an age-old tradition to which Americans should return. On a broader level, White challenges the assumed secularization narrative in LGBT progress by recovering the forgotten history of liberal Protestants' role on both sides of the debates over orthodoxy and sexual identity.

Heather R. White is a visiting assistant professor in religion and queer and gender studies at the University of Puget Sound.
For more information about Heather R. White, visit the Author Page.

"Members of mainline churches owe White a debt of gratitude for showing that 'a liberal Protestant legacy has shaped all sides of the oppositional policy over gay rights.'"--Lauren Winner, The Christian Century

“[An] original, well-written volume. . . . Fearlessly joins the conversation about the intersection of religion and sexuality.”--Choice

“Well researched and well crafted....A must read for understanding how a lot of change happened in a relatively short time.”-- Women’s Alliance for Theology, Ethics and Ritual

“Describes how liberal Protestantism in mid-twentieth century American tried to contribute to a therapeutic perspective on same sex-behavior and identity.”--Journal of American History

"White’s book offers tremendous potential for reimagining the relationship between religion and sexuality in modern-day America. Perhaps that too can help us confront the challenges that face us still."--Reviews in American History

“Provide[s] rigorous historical scholarship that illuminate[s] why the image of gays against religion has persisted, but also, and importantly, what that image overlooks about the role of religion within twentieth century gay politics.”--Religious Studies Review